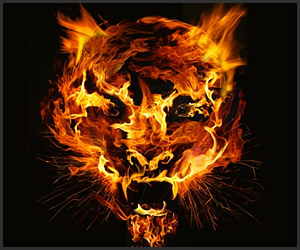 In the forests of the night,

What immortal hand or eye

Could frame thy fearful symmetry?

Last year, we took my youngest daughter and her husband on a short trip to Kanchanaburi. During that trip, I deliberately avoided going to the famous, so-called “Tiger temple” (Wat Pa Luang Ta Bua). I had read that the place was an enormous rip-off. The entrance fees were extortionate and tourists were cajoled into paying small fortunes to be photographed with or near captive tigers.

But more than this, I have long ago come to learn that training wild animals, such as tigers and elephants to perform to the public involves a high level of cruelty.

Firstly let us look at those most loveable and intelligent of gentle giants – Thai Elephants.

Secret training sessions, which involve trying up and beating baby elephants in deep jungle locations, have been filmed and have exposed the plain fact that all elephant shows are rooted in cruelty. Of this, there is absolutely no doubt.

The disturbing and brutal reality behind Thailand’s very popular elephant attractions is not widely known by tourists – or indeed, by a majority of Thais. The fact is that mahouts and elephant trainers use what is known as the ‘torture training method’ to make these wild creatures obedient and tourist friendly.

This method involves tying or chaining the elephant up in a confined pen that is too small for the animal to move. True to its name, the elephant is then tortured constantly with beatings, often involving sharp instruments, and left without food or water for days or even weeks. This is designed to break the animal’s spirit, which it certainly achieves, often taking its sanity too.

Used for centuries to domesticate wild elephants, the torture training method is still accepted as the only viable training method for elephant handlers and is used in almost every elephant attraction in Thailand. 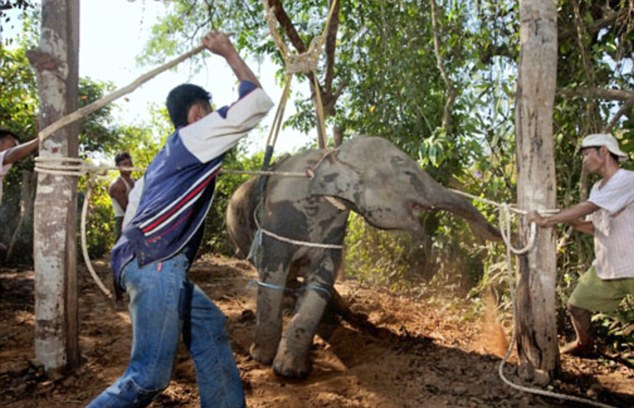 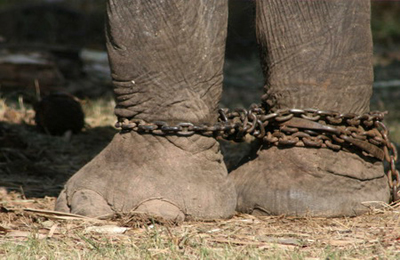 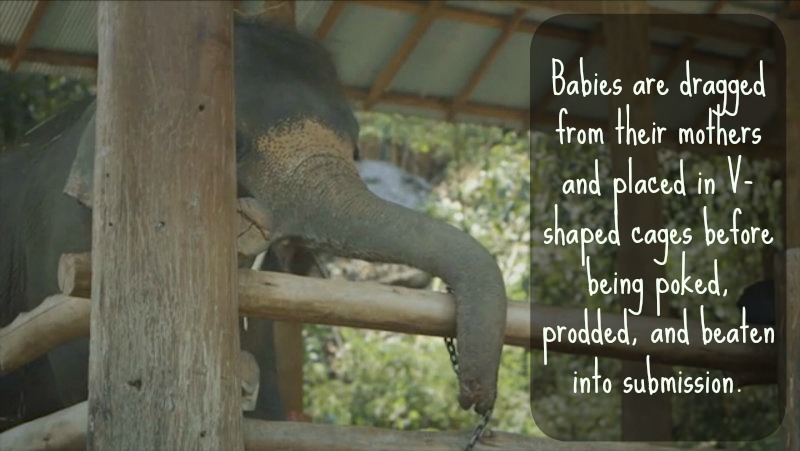 Now to the tigers.

The success of Tiger Temple is based on claims that its tigers were rescued from poachers and live and move freely and peacefully amongst the temple’s monks, who are actively engaged in conservation and rescue work.

The reality is somewhat different and Tiger Temple has much to hide.

In the wild, adult tigers tend to live out solitary lives, only joining the company of another tiger when it’s time to mate or when cubs are too young to live on their own.

At Tiger Temple, felines interact with and live amongst multiple other tigers. Actually, “multiple” doesn’t even come close to describing the amount of tigers at this popular tourist stop. At one point, the facility housed over 100 tigers, far more than the average zoo.

Furthermore, tigers are forced to interact with both workers and guests on a daily basis. There have been several claims made by tourists on tourism sites, as well as investigative reports, that workers roughly handle their animals by pulling on tiger’s tails and hitting them with thin canes. Tigers are also agitated by the tourists who think it is acceptable to sit on the animal’s backs or irritate the cats by getting too close when space is clearly needed.

Under Thai law, the exchange of tigers internationally is entirely prohibited, but a series of investigations between 2005 and 2008 established that there were at least seven tigers that had vanished from Tiger Temple, without any context, and five new tigers appeared – again –without explanation.

Evidence was later found that workers at the temple had coordinated deals with a tiger farm in Laos where older felines were traded for cubs. The cubs were then given the same names as their traded counterparts to hide the fact that tigers were being imported and exported between multiple facilities.

The tiger enclosures at Tiger Temple Thailand fell incredibly short of this standard with their cages only reaching 122 square feet, barely 10% of the recommended space. Furthermore, the reports state that the enclosures are totally free of any habitat enrichment for the tigers. At any one time only around 10 tigers are out and about and the others are locked up in their concrete floored enclosures.”

Tigers spend between 20-21 hours in their cages a day, with reports of tigers exhibiting signs of zoochosis (or repetitive behaviours exhibited by captive animals that are under extreme stress), pacing constantly or obsessively chewing on their paws.

Tigers kept in captivity are supposed to have ample shade and water to escape the heat. At Tiger Temple, the cats are forced to interact with guests for about three hours at a time in direct sunlight. Temperatures in that facility can reach around 104 degrees Fahrenheit … a heat that makes even humans complain.

So I had known for some time that the monks at Tiger Temple had no thought of well being for the tigers under their care, and they were only there to make money for themselves – monks – people who are have supposed to have forsaken all material wealth and who are supposed to practise a Buddhist philosophy in which every living creature should be treated with love, care and respect.

It therefore came with much relief recently, when more than 100 tigers and protected bird species in the Tiger Temple were impounded by authorities  following complaints that the temple was alleged to engage in illegal wildlife trading.

The removal of all the wild animals and protected birds was ordered after a combined force of more than 100 forestry and park officials, police and soldiers searched the temple.

As well as the 100 tigers in the temple, they also seized 38 hornbills, but tried in vain to find two rare wolves which were earlier seen in a cage in front of the temple.

About time too, but I wonder what – if anything – will happen to the abbot and his monks who had been operating this illegal, disgusting business involving animal cruelty  for so long? 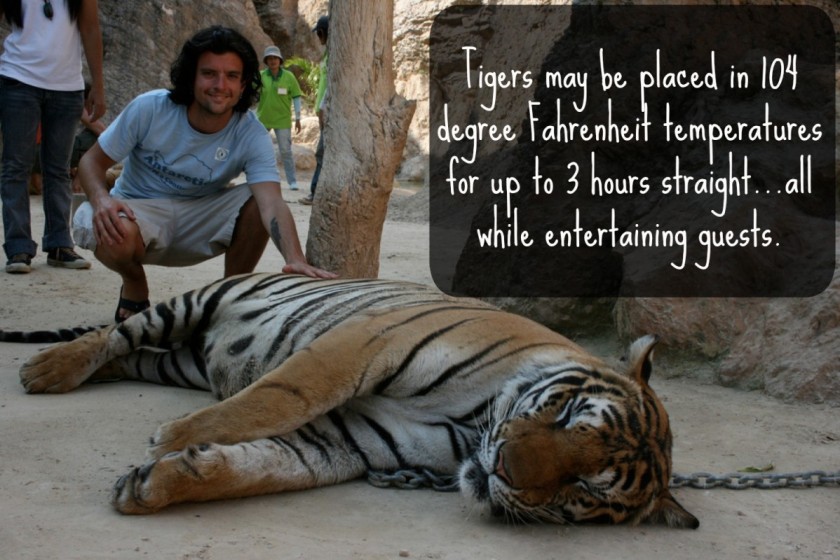 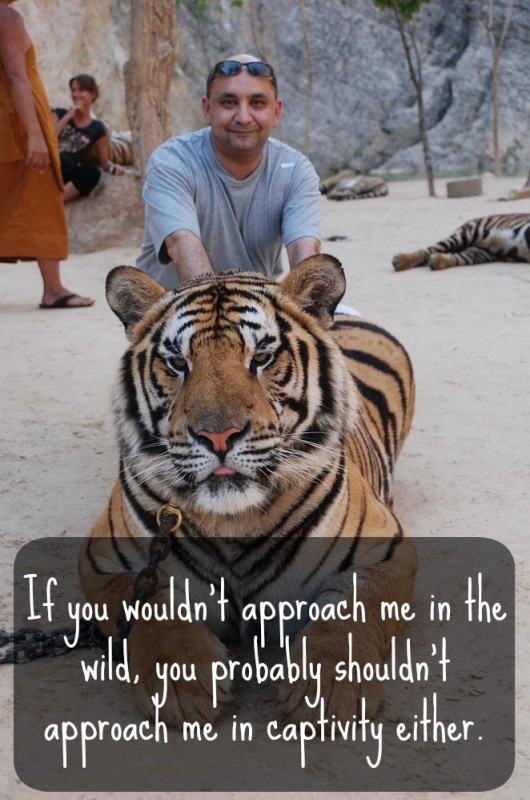