For the past two years, I have tried to see all the Oscar-nominated movies, prior to the Oscar awards ceremony. This was so that I could predict the winners; and also announce my own, alternative “Mobi’s Moscars”.

I can tell you that this was quite a slog and after last year’s marathon viewing and reviewing, I decided to quit while I was ahead. (Most of my predictions were correct)

So this year, I am just going to write a few mini-reviews of Oscar and BAFTA nominated films that I have seen. I will write a few reviews in each of my forthcoming blogs until I have covered all of the films.

This means that unlike previous years, many will be reviewed after the February 28th Oscar ceremony. I will also review a few films that have been nominated in other categories, or were tipped for a nomination but never made it. (Such as “The Hateful Eight“).

To kick off, here is my first clutch of  “mini-reviews”.

I have already written my review of Amy. The documentary about Amy Winehouse has already won the BAFTA award for best documentary, and has been likewise nominated, for an Oscar. My review can be found at: 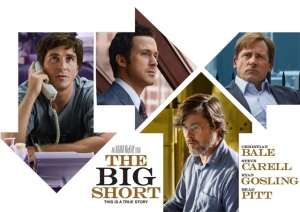 If this film hadn’t been multi-nominated and also hadn’t been so well regarded by the critics, I doubt whether I would have bothered to watch it.

This is notwithstanding  the fact that it stars one of my favourite actors, Steve Carrel. After all, do I really want to hear, yet again, about how the world went into recession and resulted in me to losing hundreds of thousands of dollars? Quite frankly, it is an event I’d rather forget.

Not only did it add to my understanding of the whole sorry saga, but it was surprisingly entertaining – full of dark humour.

The Big Short is essentially the true story about a few clever people who actually foresaw the crash coming and betted everything they could get hold of on that certainty. We, the audience are given an easy to follow lesson on what caused the recession and just how corrupt and deceitful the whole crazy US financial system turned out to be.

It is also a cliff-hanger, in as much as these disparate entrepreneurs who betted their lives on the system crashing, were nearly derailed by the utter corruption of the financial establishment.

Even when it was commonly known throughout the markets that the sub-prime bonds were worthless, none of the major banks would admit to it. Even worse, (if that’s possible) the disgusting rating agencies colluded with the establishment and continued to rate these worthless bonds as triple ‘A’ bonds.

Yet they freely admitted they knew the truth but were worried about losing their rating business.

We can’t help but applaud these clever folk who foretold the market crash and succeeded in becoming multi-millionaires. We also deplore the fact that nothing much seems to have changed, and not one of the principal criminals has spent a single night in jail.

It is an excellent, entertaining movie and definitely worth a viewing, but I’m not totally convinced it is worthy of the best film Oscar.

This film will probably win the ‘best film’ Oscar – it has already picked up a bunch of BAFTAS, including best film.

I am of two minds about it. It is entertaining, and my wife also enjoyed it, due to the sparsity of dialogue.

After all, not a whole heap happens and the plot is easy to follow. The film is set in the 1820’s in America’s northern plains (The Dakotas) and it is a story of a fur trapping trip that goes horribly wrong.

Leonardo DiCaprio plays a frontiersman and fur trapper who is employed as an expert guide to a team of desperate, wild and violent fur trappers, led by a US army captain. The trapper gang lose many of their fellow trappers when they are attacked by Indians. Subsequent to this, DiCaprio is all but killed by a bear protecting her cubs. He is left for dead.

So far so good.

After this, I have serious a credibility problem with the story. Everything that happens up to the point when DiCaprio is mauled by a bear, tells us that not one of this gang of semi-lawless ruffians, including the Captain, would have had any compunction in leaving their guide to die alone, once it became clear that he was not going to survive.

They were in a desperate situation; they had already lost more than half their number to the Indians, the sub-zero weather was appalling, and they were in constant danger of further attacks.

Would anyone in their right mind leave two men behind – separated from the safety of the main party to await Di Caprio’s death, just to give him a proper burial? What about all the other men who died? I didn’t see any of them getting a decent burial. Sorry, but that part of the story is sheer tosh and predicates the nonsense that follows.

The baddie – Tom Hardy – volunteers to stay behind and watch over DiCaprio’s demise, (for a bonus), but soon tires of this and buries him alive assuming he would soon die anyway. Even this lacks credulity  – he didn’t have any compunctions in killing DiCaprio’s son and the second man who stayed with him. Why take a chance and leave Di Caprio in the hole to die? Why not finish him off?

Of course, DiCaprio didn’t die, and after numerous brushes with near death, DiCaprio finally staggers into the fort, where the baddie takes off in a rush.

By this time Di Caprio is near to death and painfully malnourished and weak from his horrendous adventures. Yet he is allowed to accompany the Captain to track down the baddy. Only two of them from the well-manned fort went after the baddie – the Captain and a barely alive DiCaprio

DiCaprio, Hardy and the rest of the cast play their parts admirably. The cinematography is astonishing and the story holds your attention. It’s a good yarn with some great photography, but it’s a long way from being a great movie. For starters, there’s too many holes in the plot – it’s a bit like a boys’ own comic story.

As for DiCaprio winning the best actor award – well apart from a few hoarse mutterings which are largely incomprehensible, he says very little. We can’t see any ‘acting expressions’ because he is covered from head to foot with furs and shaggy beard throughout the entire movie. For sure, he does all that is asked of him, but is it really an Oscar-winning performance?

I reckon that a mute person, equally clad with fur and beard could have done the part just as well. The few lines he utters could have easily been dubbed in and nobody would have been any the wiser. If it was anyone but DiCaprio in this part, I doubt whether the various academies would be raving about it. Do you win an Oscar for bravery and sleeping inside a dead bear or do you get it for acting?

The Revenant is worth seeing, but if there’s anyone in this movie who deserves an acting Oscar, it’s the English  baddie – Tom Hardy. 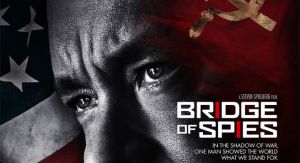 I liked this movie and was more drawn into the dramatic moments than I would have ever thought possible. It is Stephen Spielberg’s, cold-war, true tale of the Russian spy, Rudolf Abel, who was exchanged for the American U-2 Spy, Gary Powers.

As with The Big Short, I didn’t expect to enjoy this film, especially after one of my friends told me he found it quite boring.

But I disagree with my friend. I think Spielberg and the writers did a good job with the facts that they had and succeeded in transforming a potential boring ‘turn-off’ into a rattling good yarn.

The screenplay, along with great acting by Tom Hanks and Mark Ryland, and skillful directing and editing made this film a joy to watch. They made the most of their material, and I was surprised to discover that the events in the movie were closer to the truth than I had suspected to be the case.

Filmmakers are notorious for making up events to spice up a true story (as in The Imitation Game), but in The Bridge of Spies they didn’t need to – there was enough to work on.

It is unclear to this reviewer whether Gary Powers deliberately opted not to take the poison pill.The CIA instructed him to take it if he was in danger of being captured.  Was it an accident or a circumstance of misfortune?

Now I come to the controversial part of my review.

Bridge of Spies is an entertaining film and I was very happy to watch it in my own home. It certainly doesn’t need a big cinema screen and I would put it on a par with any number of excellent ‘made for TV movies’ that have been released in recent years. If it had been made for TV, I am quite sure it would have picked up a truckload of Emmys.

But an Oscar for ‘best picture’? Sorry, but I just don’t see it. It is no better than the likes of “The spy who came in from the cold” or “The Ipcress file” or many other fine films set in the cold war, spy genre. (and none of these won any Oscars)

The difference is that this one was directed by Spielberg and starred Tom Hanks.

It would seem that The Oscar academy works in weird and wonderful ways, especially when  black actors are concerned. I’m not sure about this year’s black acting candidates, but last year it was a travesty that Selma was all but ignored by the academy.

( Selma – now there was a great film that could have proudly gone down in history as Best Picture instead of the excrable Birdman,  which nobody went to see except  “insider luvvies”.)

In my next blog, I will review “The Danish Girl”, “Brooklyn” and “The Room” and maybe one or two more…