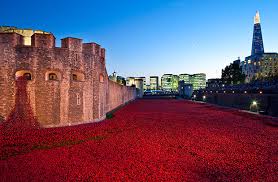 When Princess  Di was killed in a Paris road tunnel, so many thousands upon thousands of  flowers were laid at the gates outside Kensington palace, that a visitor from outer space may have been forgiven for thinking the world had gone mad. Never had there been such a display mass hysteria over the death of someone of whom 99% of the mourners had never even met, let alone ever spoken to.

Ever since then, whenever there is a personal tragedy on the streets of Britain – when someone is murdered or has died in some a terrible accident – usually a child or a young lady – that within the space of a few hours,  the local florists are busy stocking up  to satisfy the utterly predictable upsurge in demand  for flowers and bouquets.

Corners of streets and pavements would become instant gardens of remembrance, and if it is a child who has tragically died, not content with flowers, the local toy and teddy bear shops along with card shops find their shelves emptied of stock as children’s toys are bought up and appear at the site of the tragedy, along with short notes of remembrance in scented, and no doubt tear stained, envelopes. All this from people who never knew the victim.

There was a clever little one-off drama on BBC TV a couple of years back, when a girl was murdered in a residential street, and before you could say boo to a goose, the flowers, teddy bears and cards started mounting up on the pavement, near to the spot where the little girl was killed. The spot was outside a house whose owner was not in any way involved in the tragedy.

The house owner was OK with this for a few days, but as the days and weeks passed, there seemed no let-up in the donation of flowers, and a few self-appointed custodians of this unofficial remembrance site were making sure that the dead flowers were replaced with new ones and had even started planting some in the grass verge to make the spot a more permanent commemoration area.

Predictably, as time went on the people who lived in the house next to the remembrance spot were becoming more and more unhappy with the sate of affairs.

Their afternoons and evenings  were constantly disturbed by the coming and goings of the ‘mourners’ and those tending the plot.

In short, it had become a bit of nightmare for those living nearby

One local resident  became so enraged with the constant disturbance to his hitherto peaceful existence, that he crept out in the wee hours and picked up all the flowers and momentos , dug up anything that had been planted and binned the whole lot.

All hell was let loose, but I will stop the story there.

One common feature with all these questionable outpourings of public grief is the amount of money spent on the flowers and other remembrance paraphernalia. Never was there a greater reason for the victim’s relatives to say, ‘No flowers – please make a donation to a local charity.’

Somebody dies and the florists get rich. Crazy ain’t it?

All of which brings me to the 888,246 ceramic poppies that were purchased at £25 per poppy and were placed inside the dry moat that circumnavigates the Tower Of London.

The Tower’s moat was a sea of swirling, red poppies, and attracted a phenomenal number of visitors. Can you believe that during a few short weeks, more than 4 million people went to see the ‘Blood Swept Lands and Seas of Red’.

Such was the frenetic crush of massive crowds, that Tower Hill underground station had to be closed for reasons of safety, and people were warned to stay away.

The number 888,246 was significant as that was the number of people who died in the first word war; and on the face of it, buying a ceramic rose for a good cause was probably an improvement on the hitherto dubious practice of lining the pockets of the likes of Interflora, ToysRus and Hallmark.

The public were told that the proceeds would go to a series of worthy charities. We now learn that only £8.75 of each £25 will go to the six selected charities.

This is in spite of the fact that the Tower of London website stated that ‘all net proceeds plus a guaranteed 10 per cent from every poppy sold will be shared equally amongst six service charities’. It now transpires that ‘Net proceeds’ means: after all the vultures – the tax man, the  millionaire investors, the designer/manufacturer – have taken their monster cuts.

A whopping 65% goes to ‘covering costs.’ It is estimated that one of the private backers who lent 1 million pounds to set up the project will be repaid 2 million – a cool profit of £1m or 100% of his investment.

After the government takes its cut of £3.70 for VAT, the largest beneficiary appears to be the ceramic designer and manufacturer who stand to receive around £10 million, or over £11 per poppy.

Yet we are told that the poppies have been produced by the designer’s workshop in Derbyshire at a cost of £2 per poppy. Where has the remaining £9 per poppy or £8 million gone?

These days, ‘Remembering the Dead’ seems to be synonymous with gratuitous, excessive displays of mass public hysteria along with an enrichment of the chosen few.

By way of a post script, we now learn that thieves had been targeting the poppies ever since they were installed and they have now tried to break into lorries (trucks) containing the poppies.

The ‘soon- to -be-millionaire -designer’, a certain Mr Paul Cummings, said these thieves were ‘Disrespectful to the dead.’

I have every confidence that in the course of time, the enterprising Mr Cummings will be knighted by Her Maj for his ‘services to the dead.’