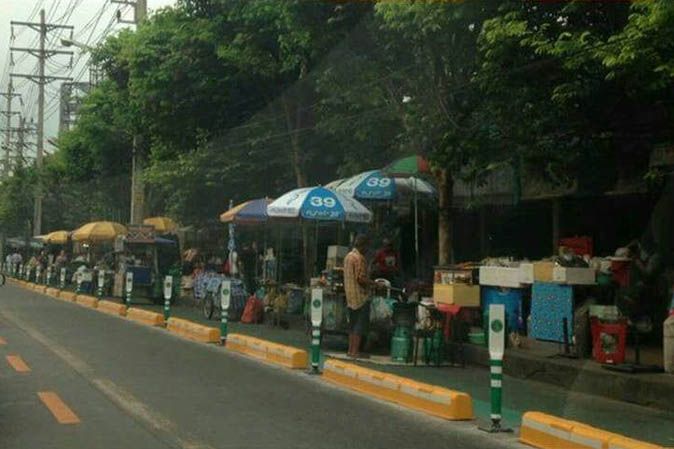 You gotta laff…It could only happen in Thailand.

The Thais’ famous entrepreneurial spirit is alive and well in the Chatuchak area of Bangkok. The caring local authorities  recently entered into the green spirit of our times, by constructing a beautiful bicycle lane to protect Bangkok’s intrepid cyclists from almost certain death on the city’s dangerous roads. 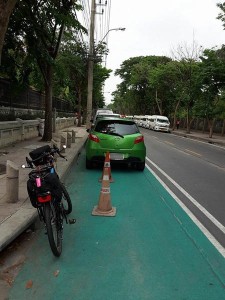 But it was not to be. No sooner had the lovely lane been completed, than street vendors set up their stalls, and tuk-tuk and cars used the remaining space as a car park.

Local opinion was in favour of the street vendors, who had been operating there long before the green trend in cycling became the latest craze.

“They don’t need their own lane,” said a local vendor, “there’s not that many cyclists.”

I venture to suggest there will be even less if they are forced to fight with six-wheeled trucks, swerving, manic bus drivers and “Hi-So” (high society=rich) budding racing drivers  in their luxury SUV’s and Lamborghinis… 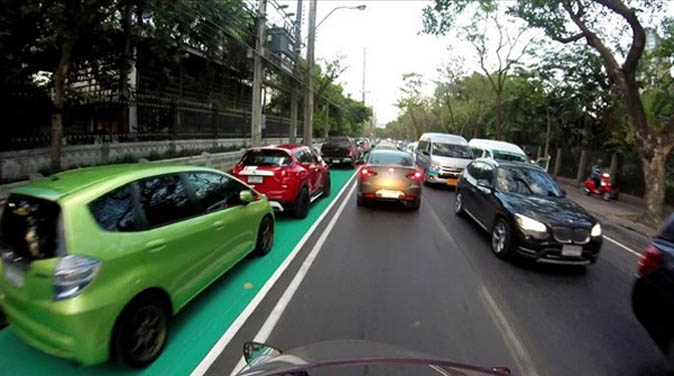 “Lo-So’s” are banged up for stealing a coconut; “Hi-So’s” kill with impunity. 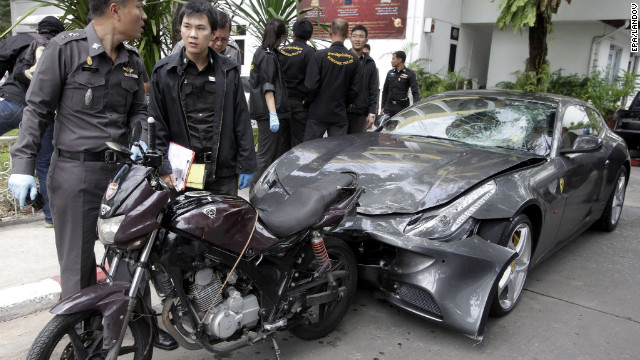 In our beloved Thailand, you can do jail time for stealing a coconut from a tree, or encroaching on National Forest land, or engaging in the world’s oldest profession – yes, it’s still a crime in a country with millions of prostitutes. People jailed for such crimes, all have one thing in common. They are hungry – they have mouths to feed and bills to pay.

Contrast this at the other end of the spectrum. Time and time again we read about the spoilt sons and daughters of the rich and powerful committing terrible crimes, but rarely – if ever – do they end up in jail.

For the most part, the police drag the cases out so long that the statute of limitations comes into play and their crimes become time barred – too late to take to court. Or, the cases  are quietly dropped a few months later, when the news is no longer in the headlines; and once the appropriate officials have been ‘squared away’ and the dead persons’ families have been duly compensated.

One famous case which is still lingering but is all but done and dusted concerns a very rich playboy son of  a world-famous energy drink owner. The drunken fool was driving his imported sports car at speed in the center of Bangkok late at night and succeeded in hitting a police sergeant on duty and dragging him along for several blocks before he stopped to remove the body parts from his car and sped off home.

There were many witnesses to this heinous crime, and also plenty of forensic evidence on the front of the car. Initially, the son arranged for one of his servants to be the fall guy and he duly confessed at the local cop shop, claiming that he was the driver. The local cops went along with this outrageous subterfuge, even though they knew it wasn’t true – after all they had hit pay dirt – there was going to be plenty of dosh sloshing around to make this hit and run death go away.

The public were outraged and the story hit the headlines, day after day. The servant admitted he had lied and the cop responsible for taking the evidence was ‘transferred’. The young wealthy driver set off for Singapore and stayed there for a very long time until all the fuss died down. He didn’t even return for his court appearances, which kept getting postponed.

Eventually, most of the charges he faced became time-barred, and there was more outrage in the press. But this time around, it was much more muted. Responding to adverse media, the police department decided to bring new charges against the son, but so far, he has continued to defy the courts and has failed to appear.

Nothing has happened to him and no warrants for his arrest have been issued. It will take as long as it has to take, but this spoilt young gentleman, whose father has a huge financial interest in Formula One motor racing, will never, ever, do time for his crime – of this, there is no doubt. 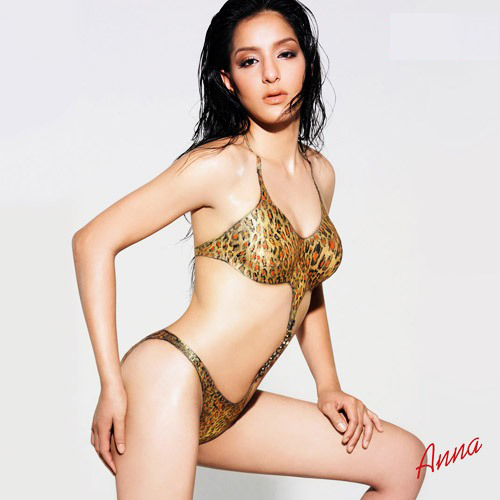 Then while all this was going on, we have ‘luk kreung’ (half Thai, half English), famous Thai actress and model, Anna Reese. Dear Anna drove her beautiful new Mercedes-Benz headlong into a parked car containing a police officer who was fast asleep. The poor cop was killed instantly, but Anna, bless her pretty little cotton socks, emerged unscathed. 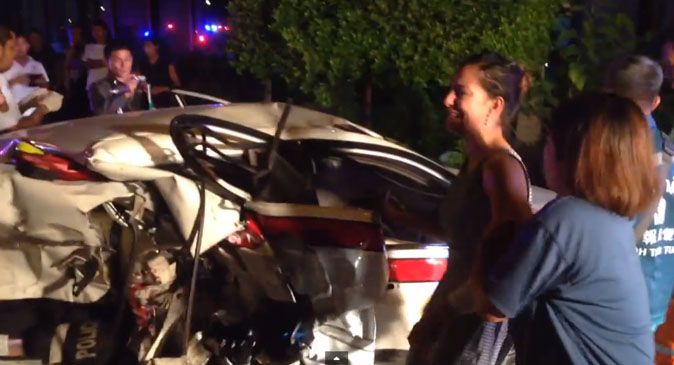 She refused to be breathalyzed or taken to the police station and was allowed to leave the scene of the crash.

Unfortunately for Anna, there was a phone video of the scene which went viral. Anna was seen to be speaking incoherently, and it showed that she was clearly intoxicated.

“No, no, no, no, I am not ready. Don’t hurt me,” she said to a police officer who asked her to go with him to the station for questioning.

“No one is going to hurt you, sister,” the policeman told her, to which she replied, “Listen to me, people in my family misunderstand me. They will misunderstand what this is, what this means.”

When the officer repeated that she had to go the station, and that “accidents do happen,” the actress shouted, “No! No!” and walked away.

Speaking to reporters the following afternoon, Anna explained she was very upset at the time and not ready to talk to police, so she called her relatives to pick her up and take her away from the scene. She also denied the accusations 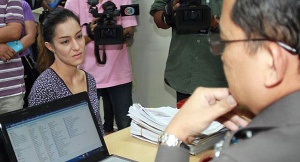 Once again the public was outraged, and she was eventually charged with reckless driving and leaving the scene of an accident, but of course, she was allowed to go free on bail.

Anna, now in a remorseful mood, attended the funeral of the dead officer, and during the funeral rituals, a woman in the crowd had a seizure. She shouted that she was being possessed by the ghost of the dead policeman, and called for Anna. The actress was quickly brought over to the woman who was a relative of the deceased. 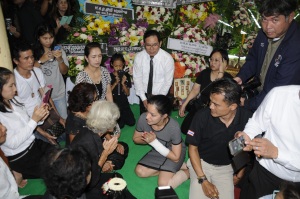 Speaking to the media the following day, Anna said the ghost had already left the woman by the time she arrived at her side, but others who watched the seizure told her the ghost had conveyed a message for her. “He asked for his family to forgive me,” Anna said. “‘Don’t hold her guilty, she is already very sad for what happened, forgive her,” Anna quoted the ghost as saying.

She said that she had also seen the ghost of the dead cop in her own dreams, and I begged him for forgiveness. She said she would meditate as a nun at a temple in Bangkok for five whole days. (Hmm….a bit better than doing 15 years for manslaughter, methinks).

All that was nearly a year ago. After the sensational assertion that the ghost had forgiven her, the media moved on to other outrageous stories.

Nobody knows quite when, but the court case was held with no fan-fare and Anna received a suspended sentence.

“It’s already over,” the dead policeman’s wife told the media, “and she didn’t even attend the court 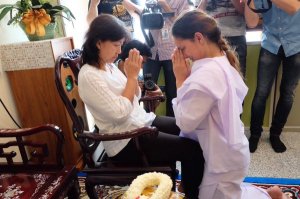 hearing.” The widow has been left having to raise two children, but it is clear she received some substantial compensation from Anna. She had initially asked for 6.2 million Bhat ($200,000), but it is thought that she settled for less.

“I won’t be contesting the court verdict and there will be no appeal,” the widow told reporters.

Money is still ‘king’ in this tainted Paradise.

Moving House in Thailand takes on a whole new meaning! 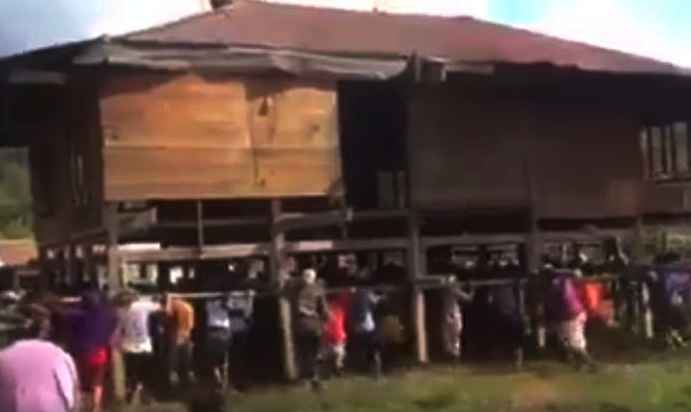 The picture tells it all.

If you want to move your home from one end of the village to the other, provided you have a typical Thai house, built on stilts, there is no problem. Just gather all the village folks together, and hey… hup! and off we go.

Knowing the different factions and antagonisms that exist in most Thai villages, this is probably one of the few occasions when they all pulled together (lifted together, to be accurate) … or maybe the house owner made them all an offer they couldn’t refuse. 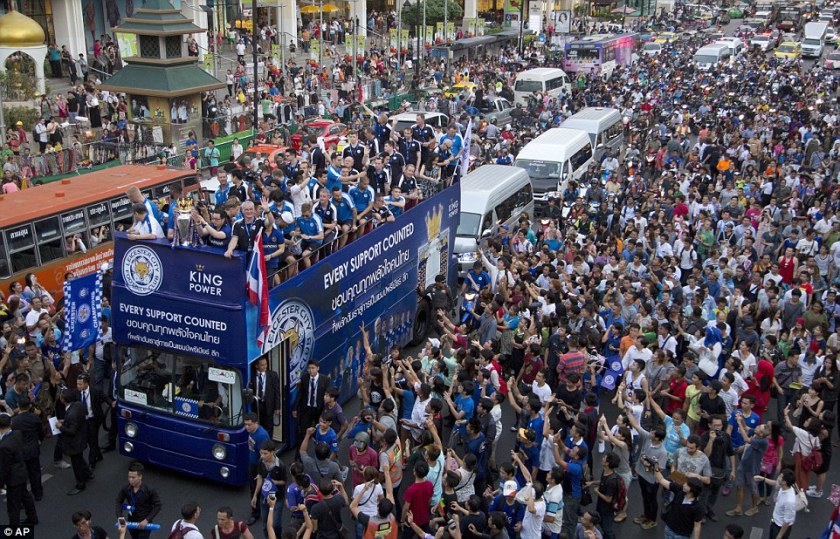 Sorry to keep banging on about football in general – and Leicester in particular. Last time I promise… for a while…

As most people who take any interest in football probably know, Leicester is owned by a multi-billionaire from Thailand. This particular gentleman has made his billions by owning and running a monopoly of duty-free shops at Thailand’s international airports for decades. His empire is appropriately named ‘King Power‘.

I wrote about this a long time back, but nobody seems to care. What country in the world other than Thailand  – not even Russia – would award a monopoly of airport shops at every Thai Airport to a single person? King Power had this monopoly before Thaksin came on the scene; they kept it during Thaksin’s period in power, and they’ve kept it ever since. It’s been a license to print money for decades and nobody bats an eyelid.

Deep enough, in fact, to buy Leicester City. But despite his very best efforts, it has been a distinctly uphill struggle to win the Thai football fans away from the likes, of Manchester United, Chelsea, Liverpool and Arsenal.

Leicester? Who the heck are they? They don’t seem to capture the same magic – not in Thailand anyway. So when Mr “King Power” flew the team to Bangkok for a victory parade, he found that he might be short of adoring fans to line the victory bus route.

Not a problem! After all, this is Thailand. (TIT) 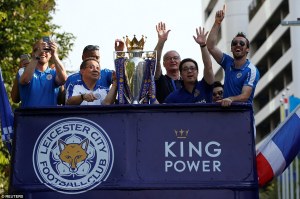 The gallant owner put a message out in Thai on FaceBook that anyone who came to cheer the team bus would be paid the princely sum of 500 Baht (£10).

So thousands of willing ‘fans’ (of money) turned up for the “Leicester parade job” They all met at the HQ of King Power and were paid their ten quid and given a free T-shirt. To swell further the number of volunteers, all King Power employees were under a three-line whip to join the crowds.