A Snake Swallowed my Cock – Almost…(Part 2) 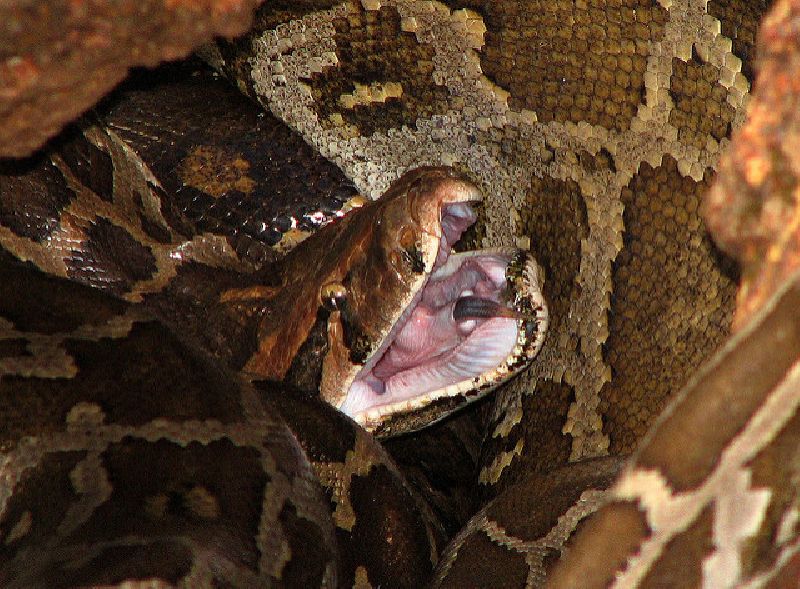 My last tongue-in-cheek article with the above headline, (HERE) didn’t involve the sort of cock everyone was thinking of. But this time, it does.

There has been a spate of stories about snakes appearing in toilets, but nothing quite like the poor young Thai man who got the shock of his life when a Python rose up through the squat toilet and put its teeth around his dangling organ

His wife heard him scream for help, asking her to bring a rope. When she reached the toilet, the man, who was covered in blood, bravely put the rope around the snakes head and tied it to the door, before passing out.

He was rushed to hospital, where grinning doctors were able to save his penis. He told them that he managed to prize the snake’s jaws open and remove his penis before the snake was able to swallow it.

Meanwhile, back at the ranch, the snake catchers were unable to remove the huge python from the toilet basin and had to break it from its mountings and take it outside, where they smashed it to free the trapped snake. It has now been released back to the wild.

Not far from the home of the young man whose nether regions were attacked by a Python, we now have a three-metre long water monitor found in a garage, next to the outside loo.

You have to give it to these fearless Thai reptile catchers. They tried lassoing it, and when that failed, they made a grab for him, put a hood over him and tied him to a stretcher.

Like the Python, the monitor was released back into the wild – no doubt thankful to be out of harm’s way…

Thais have a love-hate relationship with the water monitor. Its more common name is one of the rudest swear words in the Thai language. Some people believe that using its polite name will bring them good fortune.

But Thai men have no fear of reptiles, be they crocks, snakes or lizards. They are often their bread and butter – literally.

Some years back, when construction commenced for the new Bangkok airport, the site chosen was a huge swamp, full of every kind of reptile. Within months not a single reptile was to be found on the building site. At the same time, all the labourers seemed to be  developing large bellies…um… delicious….

The Thai 2015 contestant in the Miss Universe pageant sadly didn’t win the big one, but she did win the prize for best national costume. The judges were bowled over with her unique, perfect representation of one of the most iconic tourist attractions in Thailand – the humble tuk-tuk. Cute as hell, it couldn’t fail. 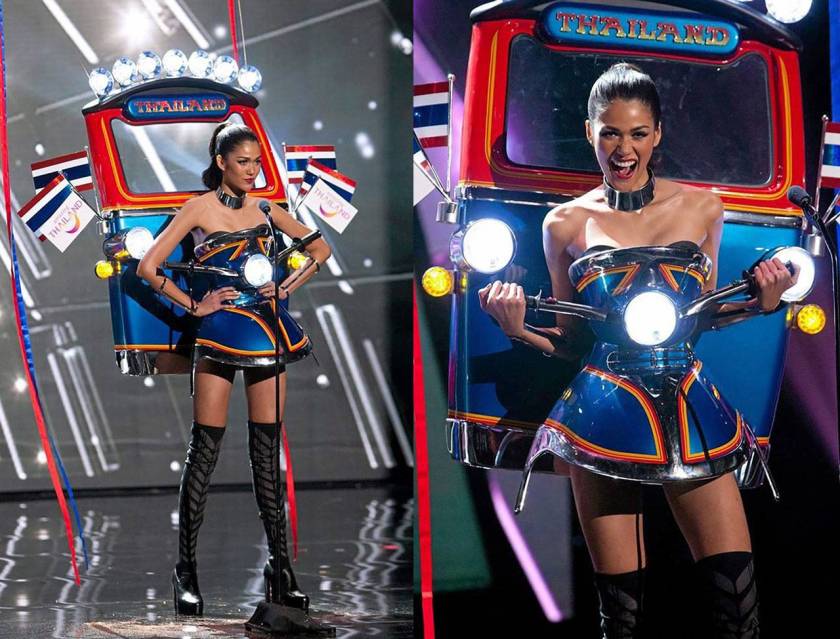 But in an effort to trump the 2105 costume, the Miss Thailand-Universe contestant for 2016, fell foul of a ‘lack of good taste’ and reverence for the Buddhist religion.

Unfortunately, the ground-breaking Golden Pagoda gown will not grace the international stage at the Miss Universe pageant as Thailand’s national costume. She announced that it would “no longer please her” to wear the dress inspired by the pagoda at Bangkok’s Wat Phra Kaew, as it was deemed inappropriate.

“What a shame for the poor girl – Getting married to that old snakehead.”

Back to snakes again? Well not really.

In neighbouring Laos and Cambodia, it is illegal for a foreigner over 60 to marry a  local girl, and while in Thailand it is sometimes frowned upon, it is usually “socially acceptable” – especially if the foreigner has loadsa dosh to spread around his new Thai family.

It is not at all uncommon to find elderly Thai men choosing very young brides, so they can hardly protest about foreigners doing the same thing.

But an extreme case was in the news recently when a 70-year-old ex-Thai cop married a seventeen-year-old Thai maiden.

For some reason, the news of the marriage went viral on a Facebook Page reserved for local ‘disasters’. Posters piled in with insulting comments, although those “for and against” the marriage were roughly 50/50.

The man who posted the news stated: “It’s not something you see every day is it? A man marrying a girl young enough to be his granddaughter”

Pailin Shona posted on Facebook : “What a shame for the poor girl. Getting married to that old snakehead.”

While Maximus Boona wrote: “it is a win-win for both sides.”

Britney Bee wrote: “Go ahead and get married, girl – you’ll soon get your life insurance pay-out.”

But Jasmine Dearden said: “The bride is so white, so lovely. Young and old men will be envious of you, granddad.”

Unsurprisingly, the page has since been taken down.