Mobi’s ‘Three For The Road’

Today I am continuing my series of occasional ‘reviews ‘, but this time, by way of  a change from films and TV programmes, I am turning my attention to the written word.

Over the last few weeks, I have read three, very different books – all of which I would like to recommend.

The first is Anthony Trollope’s ‘The Way We Live Now’. 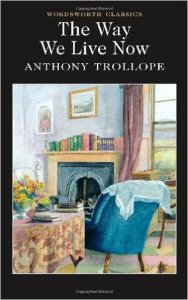 Although I am a lifetime lover of 18th and 19th Century literature, I have to admit that this was my first ever excursion a Trollope novel. There is no particular reason for this, except that on the whole, I prefer my novels to tackle serious subjects, whereas Trollope has a reputation for writing humorous novels.

This is probably unfair to Trollope, as he does indeed write about serious subjects, but he does it with satire and humour, rather than with melodrama.

Trollope is renowned for his  a prolific output so I had no less than 47 novels to choose from. After a little research, I established that ‘The Way We Live Now’ is generally considered to be his masterpiece.

Published in 1875, it is his longest  book, (100 chapters), but is well worth anyone’s effort to read it. This satirical, and at times, very funny novel is actually very easy to read.  Essentially a rebuke to the greed and dishonesty which pervaded the commercial, political, moral, and intellectual life of Victorian England in late nineteenth century; it is particularly rich in subplots and contains many finely drawn and memorable characters.

The book has twice been adapted by the BBC into a mini-series.

I always enjoy reading these nineteenth century novels, not just for the beauty of the prose, (which in itself is a pleasure), but because the likes of Dickens, Elliot, Thackeray, Austen, Hardy, the Brontës and many more, write of a country steeped in privilege and corruption, a country where the rigid class system made it virtually impossible for the downtrodden poor to improve their lot.

Although the book takes place in a world that has long since vanished, we still see many of the issues that Trollope wrote about in today’s 21st Century Britain; particularly financial greed and even the last vestiges of a class system, which although much changed, is yet to entirely disappear.

When I write about at all the problems of corruption and patronage in so-called developing countries such as Thailand, it is as well for me to remember that it wasn’t all that long ago when the country of my birth was probably as bad.

The second book is a complete contrast.  It is “Me Before You” by the English author Jojo Moyes.

I confess I had never heard of her and I came across the book by chance when I was browsing lists of best sellers and ‘good reads’ and checking the reviews, to find a contemporary novel to read.

I’m glad I did. Having previously given up on the highly regarded ‘The Goldfinch’ by Donna Tart, I wasn’t really expecting to enjoy – or even finish – this novel, written by someone I’d never heard of. But within a couple of pages I was hooked.

It is a well written ‘easy to read’ novel which deals with the very difficult subject of quadriplegia. (paralysis from the neck down). At its heart, it is a kind of love story, but Jojo Moyes does a tremendous job in drawing the reader in with her fascinating characters and a highly original story which romps along at such a pace that the book is really difficult to put down.

The subject matter may appear to be ‘difficult’, but trust me it is a gem of a story.

A word of warning – you will need a box of tissues for the final chapter or so.

The book has received excellent reviews and is currently being made into a film starring Amelia Clarke (Game of Thrones, Terminator), Sam Claflin, (Hunger Games), Charles Dance and many others and is due for release next year.

When I read the book, I hadn’t realised that Moyes is well-known as a writer in the romantic fiction genre. I was so impressed with ‘Me Before You’ that I tried another one of her best sellers, namely: ‘The One Plus One’.

This novel is also well written. It contains some absorbing characters and is almost as rich in plot as ‘Me Before You’. But it is unashamedly romantic fiction, and you would have to be really dim to not be able to predict the ending, long before you reach the final pages.

When I think back to ‘Me Before You’, I can see how this book too could be considered  a work of  romantic fiction. However, the exceptional and imaginative plot means that it is something a lot more than merely ‘genre fiction.’

Give it a try – whether you like romantic fiction or not – I doubt you will be disappointed with this one.

My final book recommendation is, ‘Nothing Is True and Everything is Possible’ – (The Surreal Heart of the New Russia) by Peter Pomerantsev. 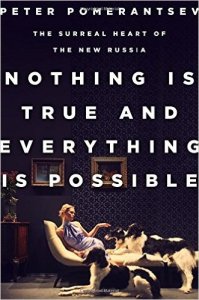 This book is non-fiction and may appeal to those who are not keen on novels.As with the first two, it is a book that is  difficult to put down.

Many years ago I read a book written by an American who went to college in Moscow for a few years during the Soviet era. The book described in graphic detail what  life was like living under the authoritarian, ruthless Soviet regime.

I enjoyed it immensely, and I remember it so well. If the author was to be believed, it seemed that the entire younger generation was obsessed by three things: Vodka, western culture and sex – not necessarily in that order. Indeed for many, promiscuous sex with anyone who was up for it (and most were) dominated their lives.

They had these obsessions because there was nothing else to aspire to. They took incredible risks to inject some fun in their dour, depressing existences and they knew that at any time there could be knock on the door and one of their friends would disappear forever.

I forget the name of the book, or the author, or when it was written, but it must have been some time in the 1970’s.

And now I have read ‘Nothing Is True…’ , written by an Englishman, born in the UK to Russian émigré parents, and who speaks fluent Russian.  He went to Moscow in the early 2,000s and spent almost a decade there working as a TV producer, making documentaries and reality shows for Russian audiences.

If any of my readers are in any doubt about  what is going on in Russia, and what Putin and his cohorts are up to, they would do well to read this book.

The book is both highly entertaining, and thoroughly depressing.

It is entertaining because it tells the tales of real people (you can look most of them up in Wikipedia, if you have any doubts) who prospered, suffered and even died during the time that the author worked there. It gives you a unique insight into what makes them tick, their motivations, their aspirations, their thoughts, their hopes and their fears.

His job enabled him to get close to many public figures; from supermodels, to celebrity gangsters, to billionaire oligarchs and human rights activists – some of whom had been summarily thrown in jail.

The tales of the would-be models, many of whom ended-up as prostitutes, gangsters’ molls or the super rich’s mistresses is absorbing, as are the tales of the men  of modern day Russia.

This well-written book leaves the reader in no doubt that Russian society is utterly and ruthless corrupt – from the President down.We read how modern-day ‘mind manipulators’ cleverly use western social media techniques and television formats to turn and twist everything they do to their own advantage.

They stop at nothing to control the minds of the masses, including black magic and mysticism and even homophobia. It is both shocking and fascinating. Even the author’s own TV documentaries, in which he was  only allowed to tell half the story, were cynically used for government propaganda

I have long deplored what is going on in Ukraine; the lies, the distortion of the truth and the outright fabrication of facts by Putin and his cohorts.

But even I didn’t realise that Putin and his ‘nouveau-riche’ billionaire supporters had total control of the country and it’s people. It is no different to the days of Lenin or Stalin, (who incidentally, is nowadays frequently fêted as a hero).

Democracy is a complete sham, and everything is smoke and mirrors. If  you read about a protest on the streets of Moscow, or about some high profile prisoner being released from jail, it has happened because the Kremlin has decreed that it should happen. It is all totally stage-managed by the authorities for their own, self-serving purposes.

The judges are completely under the control of their political masters and they do what they are told to do.

Laws are enacted and manipulated by the ruling elite. More than  99% percent of all people who are  charged with a crime are found guilty. On the very rare occasions when a court decides someone is innocent, it is because somebody somewhere decided that it should be so, for their own nefarious reasons.

As in Soviet times, there is well-documented evidence  that many who oppose the regime are either being thrown in jail for lengthy prison sentences or simply killed out of hand. The few opponents of the government who still live ‘freely’, are only allowed to do so at the whim of the Kremlin, for propaganda purposes.

Is the current day authoritarian Regime any better than the Soviet era? As in Soviet days, the human rights of ‘the people’ are being brutally repressed,  but of course, there is much more money around – thanks to oil – so the poorest no longer die of hunger.

But the jails are teeming with prisoners, jam packed so tightly into cells that there is barely room to breathe. Many government opponents die in these horrendous conditions. Others either mysteriously disappear or are  shot dead on the streets of Moscow as a warning.

What is the future for the Russian people?  State sponsored corruption and terror rarely lasts forever. Putin and his inner circle are desperate to cling on to power. Should he step down, he very likely will be  ‘hoisted by his own petard’. So things may well get worse before they get better.

But the world is slowly becoming less dependent on oil, and the collapse of oil prices together with biting western sanctions may have grave consequences for the Russian economy over the coming years.

Will Putin be able to continue to control this massive country of 144 million people? Who knows? We will have to watch and see how it plays out.

For anyone interested in current day world affairs, or simply for those looking for an entertaining and informative read, this book has to be a ‘must’. You will not be disappointed.