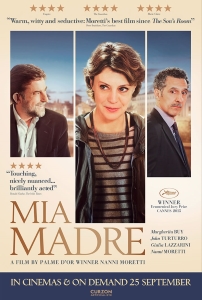 Two for the EU

In registering my preference for remaining in the EU, despite my animosity towards the EU bureaucracy for decades, today I will review two wonderful movies from our continental friends across the channel.

The first is from France and the second from Italy – two countries that rarely fail to produce outstanding and original films that are such a refreshing change from the Hollywood franchise crap, and also, I’m afraid to say, much of the English output.

These days, my main choice of dramatic viewing on TV is from the Scandinavian countries (who also produce good movies) and from the cinema, it is usually the French and Italians that lead the field.

The very best TV drama that I have seen this year by a mile was, “Trapped”, an Icelandic production, written by, produced by and starring Icelanders and set in their beautiful country.

These days I struggle with British TV dramas. Even some of the best, such as Line of Duty, and the Night Manager are quite watchable but not as great as many would make out.

Most of it is just rehashed rubbish, with badly written, cliché ridden plots and not always particularly well-acted. With the advent of Netflix, Amazon and other US cable outfits, there is some pretty good stuff coming out of the USA, but it seems that a hoped-for revolution in innovative British drama is yet to take off.

One British Drama that I did find extremely well done was “The Secret”, an ITV drama based on true events. I might write a review of this in my next blog.

But for now, back to my two European movies.

For those who shy away from non-English language movies and reject sub-titles as being too much of a distraction, may I suggest that you give one a try.

You will be really surprised how quickly you adapt to subtitles. It won’t be long before you hardly realise you are reading subtitles and it becomes automatic. And as for those of us who don’t hear as well as we used to, it is a positive boon – as at long last you can follow all the intricacies of the plot that previously you could only guess at.

‘Mon Roi’ (“My King”), which was selected to compete in the Cannes Film Festival, is a typical French tale of a tortuous relationship between a highly charismatic man (Georgio) and a woman (Tony) who he charms into marriage.

Most of the movie is told in flashbacks. Tony is in rehabilitation following a serious Skiing accident in which there is a suggestion that it might have been a deliberate attempt at suicide. Here she meets some much younger, diverse characters who offer her support and become firm friends. It is during this time that she looks back over her life with Georgio.

The two were very much in love, and at first, things go very well. Georgio owns a smart restaurant and Tony is carried away with his lifestyle and his ‘joie de vivre’. He sweeps her off her feet, even though there are a number of early warning signs that  things may eventually go a bit awry.

He takes her to a wedding ceremony without advance warning where he happens to be the best man; then she meets one of his ex-girlfriends (Agnes) who is working at Georgio’s restaurant, and who accuses Tony of stealing her boyfriend. Next, Georgio insists that Tony becomes pregnant – and when she duly complies, the two get married.

Things get worse. On hearing the news of the marriage, Agnes tries to kill herself and in the aftermath, Georgio insists on taking care of her. The newly married couple fight many times and separate, only to reconcile again. By this time Georgio is living in his own apartment for much of the time and Tony catches him with a strange girl in his bed.

There is much more, but although my review does contain  a few spoilers, I won’t tell you what happens and completely ruin it for those who want to watch it.

Very few western couples succeed in remaining together for their entire lives, and this movie is a typical story of incapability. Despite the unquenchable fiery love between them, it is clear that love alone is not enough to support a marriage.

The clever flashbacks, the high production values and the outstanding acting of the entire cast, including the young people Tony meets at the rehabilitation centre and Tony’s brother and his girlfriend, who act as Tony’s counsellors, make this movie a real gem to watch.

But it is the two central characters played by Emmanuelle Bercot (Tony) and Vincent Cassel who plays a blinder as Georgio that makes this film so watchable and believable. Bercot picked up the best actress gong at the Cannes Film Festival.

‘Mon Roi’ is a masterpiece of French filmmaking, and they didn’t need a ‘cop whodunit’ or a mass shooting or a hostage-taking or a terrorist outrage to have me glued to the screen throughout its two hours + length.

Four and a half Mobi-Stars out of five.

Mia Madre (“My Mum”) is a typical Italian offering – a story that has no beginning and no end… but the bits in between are absolutely delightful and totally absorbing.

Mia Madre is filled with unforgettable characters. At its heart is Margherita, (played by Margherita Buy), a middle-aged film director who has made any number of gritty Italian ‘socially aware’ movies in the style of a Ken Loach or Mile Leigh. She is now questioning whether her films really work and if they make any difference to an indifferent world.

She is having problems with her latest effort, a film about a factory whose workers are on strike and is being taken over by a rich Italian/American. She has trouble with the production and camera crews and is having a nightmare with an Italian/American actor, Barry, brought in to play the new factory owner, and who continually forgets his lines.

She has broken up with her partner and cannot relate to her teenage daughter. But the biggest problem is her mother, who is in hospital dying; but mum hasn’t been told she is dying and wants to go home.

It’s enough to drag down most people in a mid-life crisis and it very nearly does for Margherita. There are some wonderful scenes between Margherita and her mother and with her ex-partner, and her brother, both of whom are distressed with Mum’s condition.

Then there is the interplay with her daughter who is being rebellious but is also emotionally affected by her Grandmother’s condition.

From time to time, Margherita has flashbacks of her mother in better times when she was a highly regarded lecturer at a university. She sadly speculates on what will happen to hundreds of books owned by her mother after she dies.

Amidst all this, the film production stumbles on, and relations between Margherita and star actor Barry get worse and worse, with Barry ‘blowing up’ on set and later Margherita telling him just what she thinks of him in words that leave little to the imagination.

It’s a wonderful mishmash of emotions and strong personalities, and the great acting brings these characters alive and makes you want to know what happens. As I said, it doesn’t really have any ending, but it does have closure of sorts, and the film will leave you feeling quite satisfied, as good Italian films always do.

Mia Madre won the Prize of the Ecumenical Jury at last year’s Cannes Film Festival, and at a running time of 1 hour 45 minutes, it will uplift your spirits and give you much food for thought.

Four and a half Mobi-Stars out of Five.