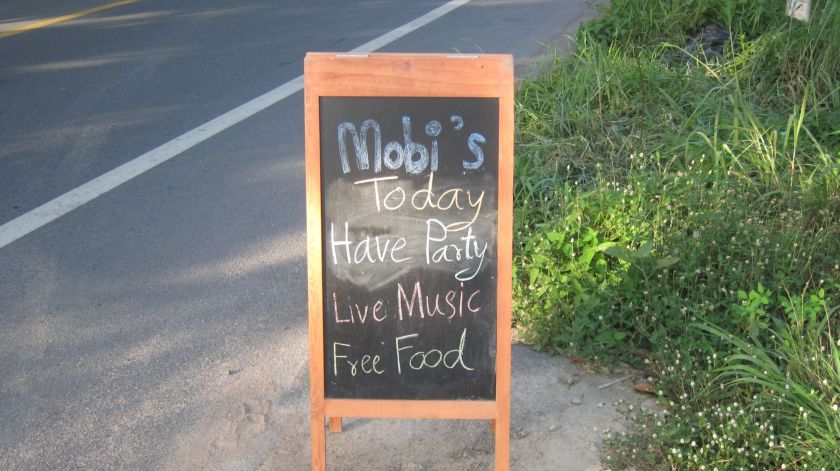 The big news stories of the week have been my marriage to Noo on Tuesday followed by the grand party on Friday at Mobi’s to celebrate both the wedding and the completion (well almost..) of two months successful trading.

The legal marriage formalities were all but scuppered last Tuesday when we went to the amphur (district office) at Banglamung and the officer reviewed our paperwork and informed us that the papers were not in order.

She went on to explain that my name in Thai on the translation of the affirmation that I signed at the British embassy was not spelt in the same way as it was (in Thai) on my divorce papers, (from my previous marriage to Dang). One letter in my middle name had been notated differently in Thai script.

Noo looked at the officer though her doleful eyes and informed her that we had already been to Bangkok twice and that if we had to go again, we would have to cancel the wedding party.

The officer stared sternly back at Noo, and much to my surprise, she relented and agreed that we could go ahead with the marriage formalities.

Once this little ‘hiccup’ had been resolved, the bureaucratic formalities followed, with much copying of passports, ID cards, home registration papers, divorce papers, sworn affirmations and goodness knows what else, and then so much signing of forms and copied documents that I thought my hand would drop off.

Finally, about an hour later, we paid the fee of 300 baht, (about 6 pounds), and two pristine marriage certificates were printed off in glorious Technicolor.

Mobi was a married man for the 6th (and final) time.

Although I have gone along with this marriage primarily because Noo wanted it, I am only too happy to have acceded to her wishes, as she is by far and away the best thing that has ever happened to me in my life.

I hope and pray that we will have many happy married years together.

Our energies were then directed to the big party bash on Friday evening. It didn’t help when no less than four of our ladies did a ‘disappearing trick’ for 2 days, but when threats of instant dismissal reached the ears of the errant four, they reappeared on Friday morning, in time to lend a hand to the final party preparations.

In the meantime another girl from Noo’s village arrived and signed on to work at Mobi’s; we now have a total complement of 8 ladies (including Noo) to take care of our valued customers.

I feel we are close to our staff limit, provided that they are all still there next month. Bar girls have a habit of moving on after they receive their monthly salary.

It is for this reason that most – if not all – bars delay paying their staff until a week into the following month as this prevent most ladies from changing employers – as to do so would mean losing a week’s pay.

However, I refuse to enter into this kind of financial ‘intimidation’ and all of Mobi’s staff will be paid on the first day of the new month.

If they want to leave, then so be it – I will not stand in their way.

So we shall see how many staff we have left come July 2nd… I believe we treat them very well – certainly better than most bars –  and I am confident that a majority of them will stay with us.

I confess that during the week I became extremely worried about the Friday night party and was having serious reservations as to whether I was doing the right thing.

‘What if nobody comes?’ I kept asking myself. Mobi’s will be a laughing stock and the news will spread like wild fire….

On Friday morning I felt extremely anxious and depressed and it took a huge effort for me to snap out of it and lend a hand down at the bar to ensure everything was going according to plan.

Of course it was – Noo and her aunt had everything in hand and the other girls were chipping in with all the party preparations.

The live music was booked, the extra (overflow) chairs had been delivered, the barbequed ‘pork-on-a-spit’ was on its way, balloons had been hung in the bar, the bar was fully stocked with extra cases of cold beer, and everything was looking spick and span. The food preparation was well in hand and one of my friend’s girlfriends had chipped in to cook some from her home – an effort for which I am very grateful.

I decided to go  home for a while, after satisfying myself  that everything was in hand, under the watchful eyes of Noo,  and returned around 5.30 to find all the girls dressed in their finest party clothes and looking like a million baht…

Night quickly descended, and when the last of the afternoon punters had departed, there was a moment – at around 6.30 p.m. – when we didn’t have a single customer in the bar. I started to panic – was this a full-blown disaster in the makings?

Noo said, ‘Never mind – if nobody comes we will have our own littler knees up and to h..ll with them all.’

Of course my fears were totally unfounded and within 10 minutes the evening revellers started to arrive.

Around 7.30 the live music struck up and before long we were fast running out of seating space in our little bar.

The customers kept coming; many I recognised from previous visits, and there was a good sprinkling of new customers, all of whom joined in the spirit of the occasion.

We must have been doing something right as a vast majority of the guests stayed for at least two hours and many much longer.

The food was excellent, (even if I say so myself), and we supplemented the barbequed pork with fried rice, Thai food, pasta, pork sausages, pies, fresh baguette bread and ham, fresh fruit and goodness knows what else.

I was pleased to see everyone stacking their plates high and many coming back for second helpings.

The live music was also a hit.

It was loud but not TOOOO loud and the ‘band’ came with three singers. The main man had a very good voice and sang a lot of western ‘oldies’ which went down well. Then the two young singers (one female and one …I’m not too sure…) switched the entertainment to Thai music with excellent renditions of popular Thai songs and later Issan (Mor lam ) music which had everyone’s feet tapping.

Naturally, the Thai females present, (working girls and guests), let their hair down when their favourite Mor lam songs started ringing out and we soon had a bit of a female rave-up in progress, fuelled – of course – by generous doses of alcohol.

It really was a great and highly successful evening, and was only marred slightly at the ‘death’ (after 99 % of the customers had left and the band werer packing up) when there was an altercation between a drunken female Thai customer, (whose boyfriend had inexplicably left her there and gone home), and one of Mobi’s ladies.

I suppose this kind of thing is always liable to happen when alcohol is being poured down people’s throats for many hours, but I have to say it was an unfortunate end to what, up to that point, had been a truly great evening.

By the next morning the dust had settled and I was able to put the incident in perspective. I am satisfied that the party was an unqualified success and can only help Mobi’s future trade.

A ‘new’ sound system at Mobi’s

I successfully ‘upgraded’ Mobi’s bar sound system during the week, at zero cost to the dwindling Mobi exchequer.

The original system was a 15 years old Sony home stereo, which was ‘state of art’ in its day, but had never been designed to provide music for a largish public area. It was definitely overextended when I installed it in the bar and used it to provide the background music.

Customers sitting near to either of the two speakers (which were mounted facing outwards from each end of the bar) could hear the music OK, but anyone sitting in the centre or roadside end of the bar couldn’t hear much, unless I turned up the volume very loud, in which case it would often distort. An additional problem was music filtering in from the adjacent bars.

I had come to the conclusion that I would have little choice but to upgrade the sound system – which would involve a substantial financial outlay. I had been putting out ‘feelers’ on the best system I could buy without having to invest a fortune.

Then I had a stroke of positive stroke of genius.

It suddenly occurred to me that I had another old Sony home theatre system at home, which had an ancient, but very powerful amplifier and it also boasted a large sub-woofer. A strong bass sound was something I was seriously lacking in the bar.

I decided to put the home theatre amplifier in the bar and attach it to the two existing Sony speakers, plus two more speakers from the theatre system as well as the sub-woofer. I mounted the two additional speakers at the street end of the bar to provide more sound at that end and to drown out competing music from the other bars.

I can’t claim the resultant sound is of ‘JBL quality’, but it more than does the job and I have already received comments from several guests that it is vast improvement on what I had before.

I wonder what they might think if I told them that all four speakers are being driven from a single, ‘central speaker’ outlet on the amplifier as none of the other speaker outlets work!

Talk about Heath Robinson …. but so far, so good…

Some pics from Party night. 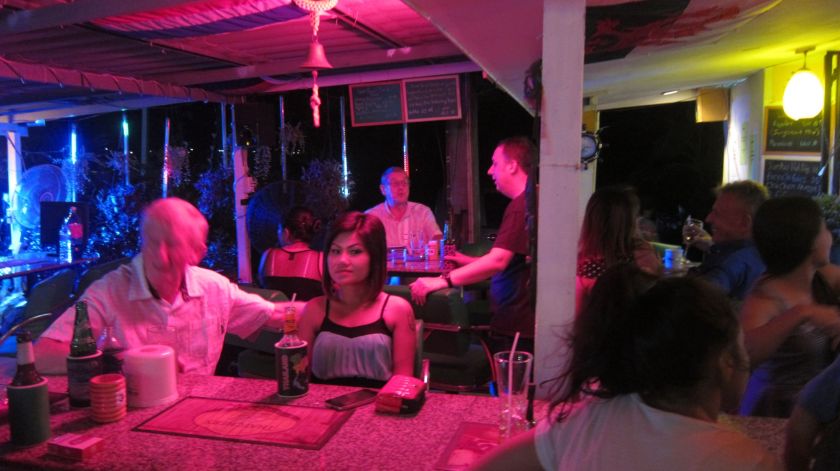 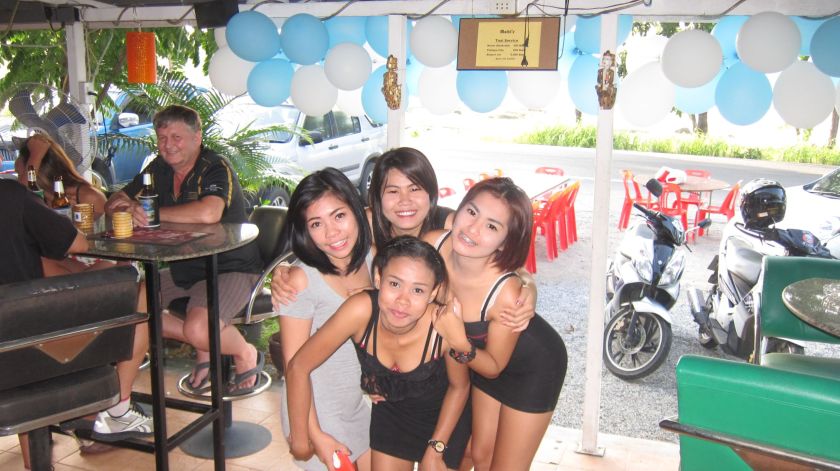 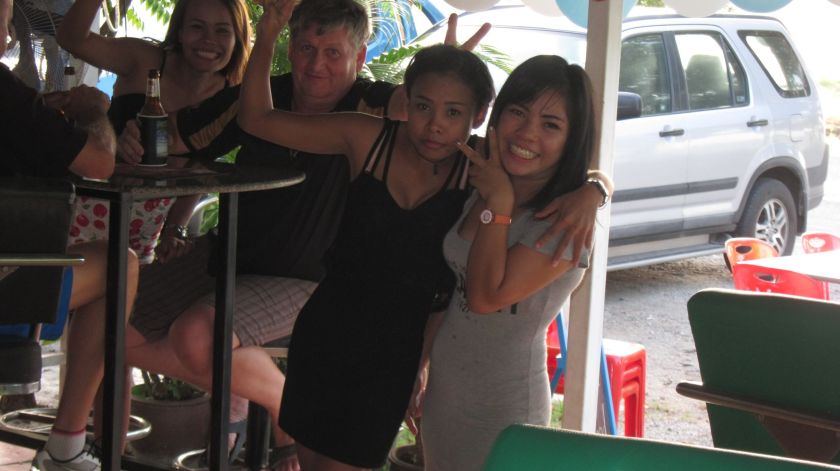 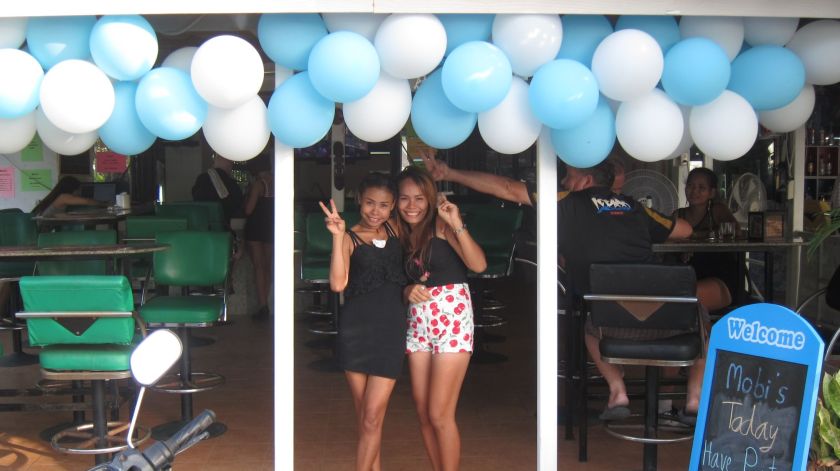 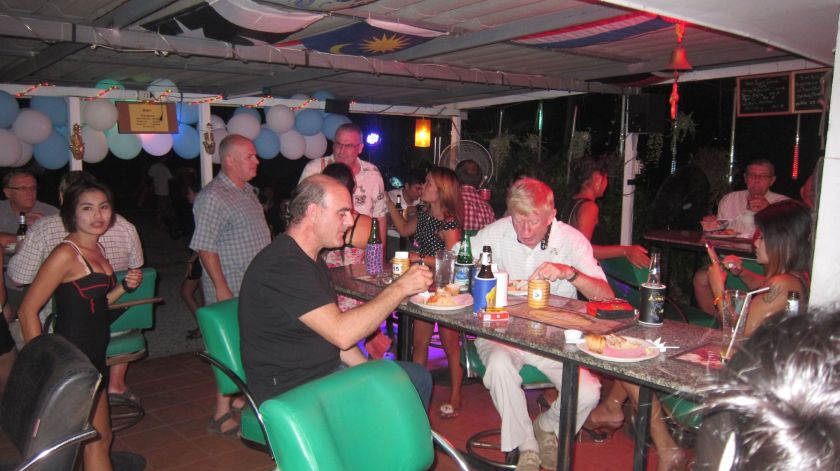 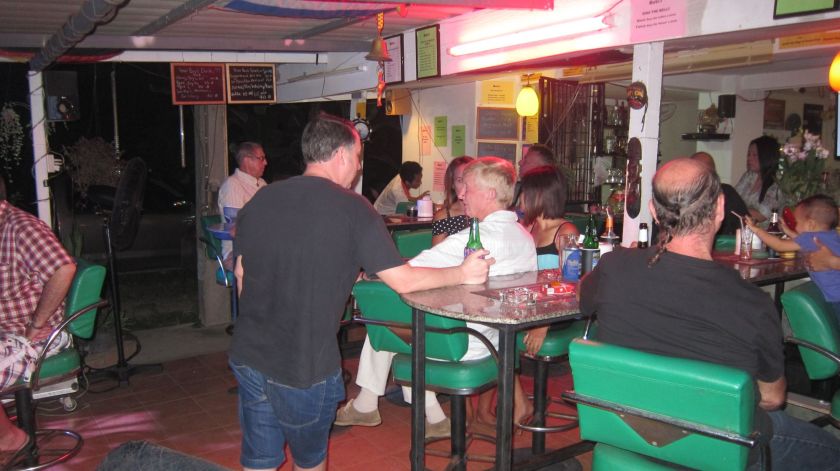 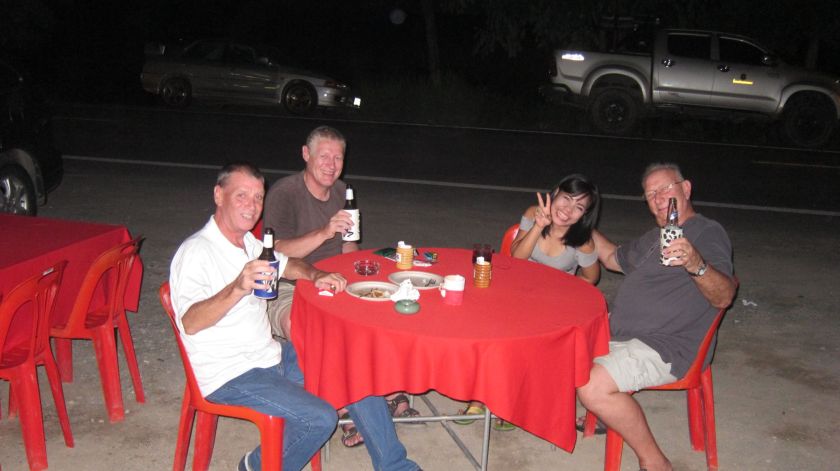 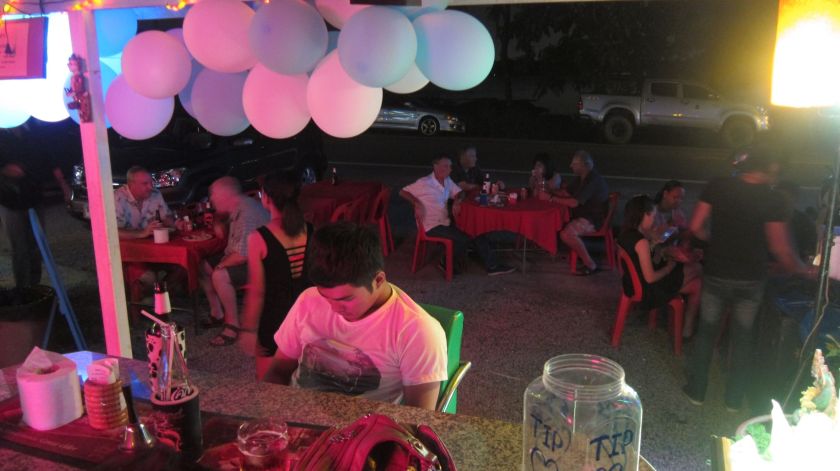 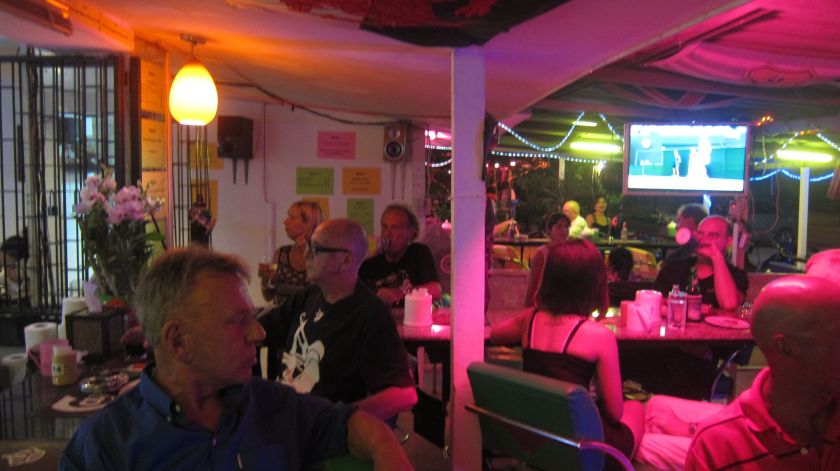 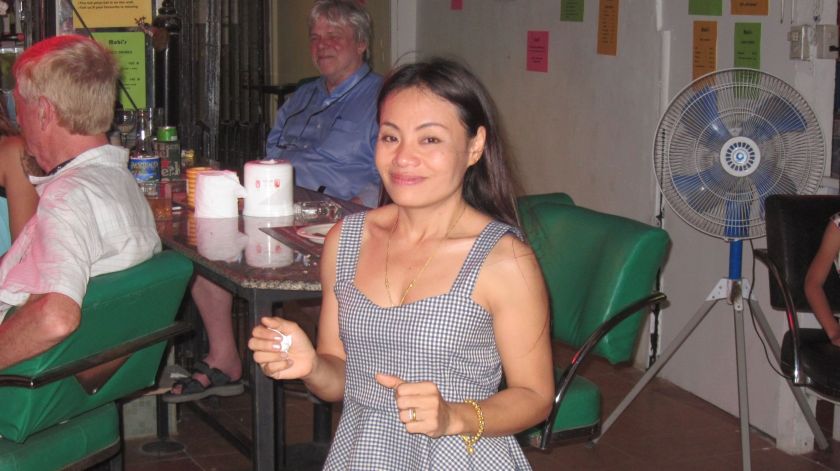 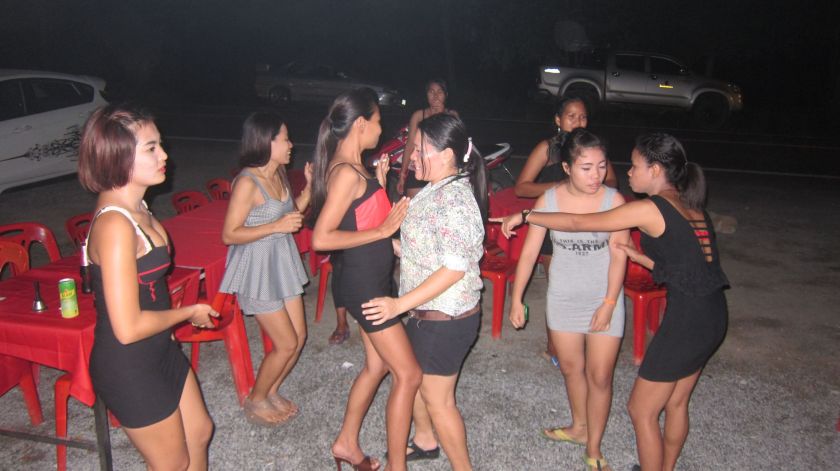 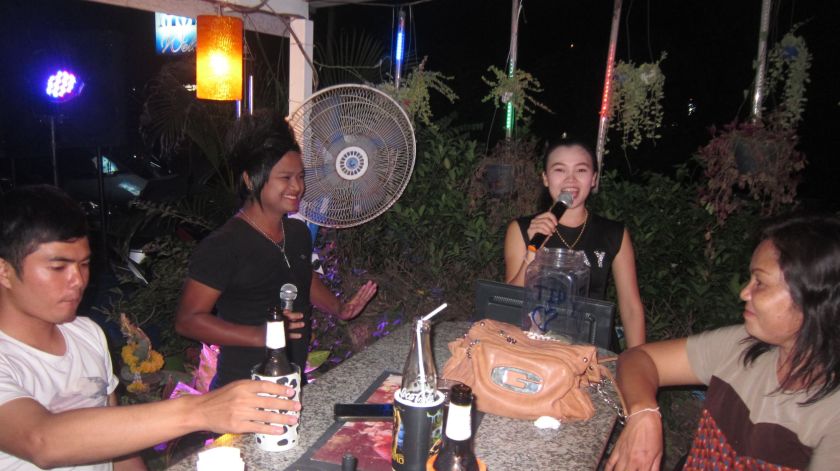 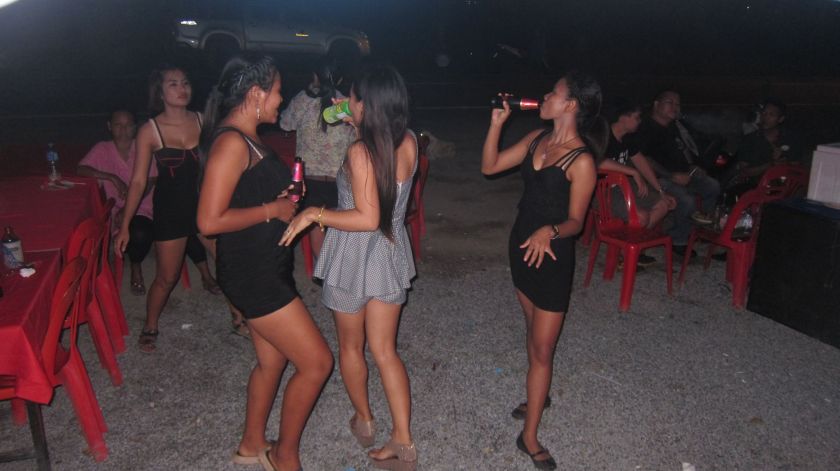