Hotter than a whorehouse on nickel night! 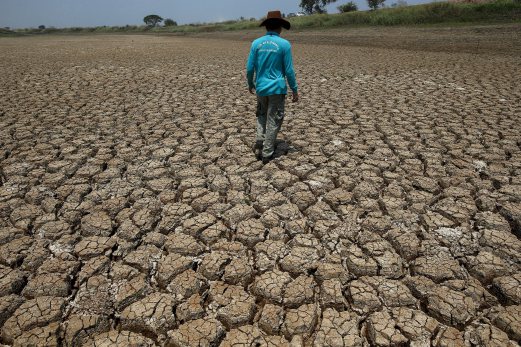 Back on 2nd April, I wrote that the weather seemed to have taken a turn for the better, and temperatures had dropped a little. Hmm I should have held my pen, as a few days later the temperatures started to soar and we have been suffering in heat of over 40°+C ,(105°F), for at least three weeks now and there is no end in sight.

Strangely, it is hotter out here in Pong than in Pattaya City where the afternoon temperatures are only in the low-mid thirties; but it is cooler here overnight  with lows at 24°, but in Pattaya they only drop to around 29°-30°.

The high humidity makes it feel even hotter, so 40° feels like around 45°. At these temperatures, electric fans don’t make any difference as they simply blow hot air at you, and I have been finding it very hard to work in the afternoons. Everybody is suffering – including the poor dogs, who seek out the coolest place in the house, (usually the downstairs toilet) and lay there, panting away.

The master bedroom contains the only air conditioner in our house, and a few days ago I gave up the unequal struggle and the whole family, including our 4 dogs, decamped to the bedroom in mid- afternoons and we all luxuriated in air-conditioned comfort for a few hours until dusk blissfully arrived.

We are still going out every day for a walk with the dogs across some nearby fields. We do this just before sunset when the sun is very low in the sky and the fields and roads are cast in shadow. It’s about a five-minute drive from where we live, and for the past week, I have been walking back home by myself to get more exercise.

I am really pleased with this, as I am now walking for a good 30 minutes a day. It isn’t much fun in this heat, as you can imagine, and by the time I get back home I’m dripping with sweat and pretty exhausted. But it is what I need and I am hoping that I will shed a bit of weight around my midriff as my blood sugar levels have been rather high of late.

I wrote a few weeks ago that poor Micky has been having problems with his skin and the vet shaved all his hair off as part of the treatment. Since then the vast red patches on his skin have started to look a lot healthier and he seems to be quite comfortable. His hair will take at least 4 months to grow back so we’ll see how it goes. 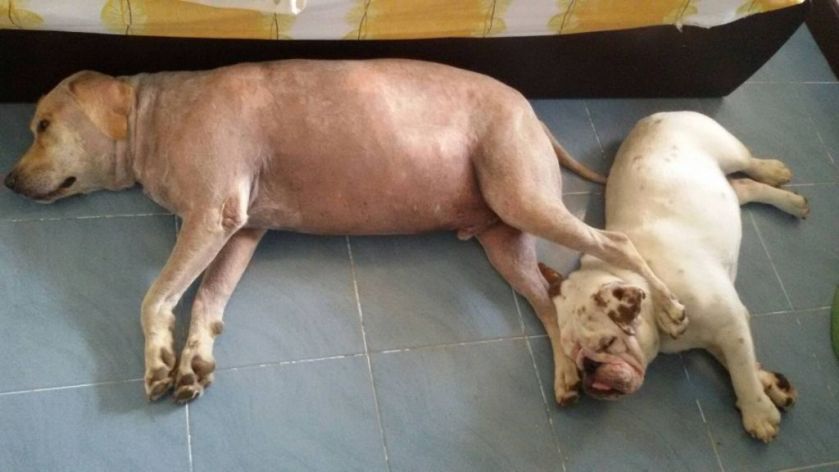 Our bulldog, Sunny is continuing to grow, especially in his hindquarters and he seems a lot more stable when he walks. Before, he used to waddle around and often slip and fall over as he was top-heavy but now he seems more balanced. In the past week, he has broken into a proper doggie gallop when we take him out and he has a surprising turn of speed – for a few yards….

When we first brought him home, his head was heavier than his body, and when I tried to pick him up from the middle of his body, he would nearly topple over onto his head… Now, I can pick up without that problem occurring, but his getting mighty heavy – over 25 kilos.

He really is the craziest dog we have ever had, but we all love him to bits. He never stops playing and he is very loving and extremely sensitive. If he is told off for misbehaving – he goes into the bathroom and sulks for a couple of hours. None of our other dogs do this. Micky and Sunny are now inseparable and they groom each other all day long.

Everything goes in threes…. I hope not!

To those of you who envy my life out here in my tropical paradise, would do well to consider the downsides of this somewhat ‘Tainted paradise, not least of which is the lack of really decent health care. Unless you are loaded with money – as the major hospitals have now priced themselves out of the market as far as us humble folks with modest incomes are concerned.

Our choices are limited to 2nd rate private hospitals – which are still quite costly, or government hospitals, which are appalling unless you can get to one of the major teaching hospitals in Bangkok. Even then you have to ‘jump through hoops’ and wait in a long line – as I did when I had my heart valve replaced 3 years ago.

Two of my closest friends have both been in the medical wars as of late. They both live in Pattaya within a couple of miles of my house and their experiences only serve to remind me of how vulnerable us oldies are, so far away from western-style medical care.

The first friend was rushed into hospital a few weeks ago with bad chest pains, and after being moved from one hospital to another, and then going to a third hospital to have an ultrasound because the other hospitals didn’t have the equipment, they told him that had had a heart attack. Really! I would never have guessed.

They told him he would need a stent, and as he didn’t trust either of the hospitals with this procedure, he went to a third hospital, which is about 45 minutes’ drive from Pattaya. First off, he needed an angiogram to establish the extent of the pipe damage, and how much of a re-bore was needed.

Even the angiogram went wrong. They tried to enter the camera via the radial artery in his wrist but the camera ground to a halt half way to his heart. His artery was in a tight loop across his chest, creating a sort of ‘cul-de-sac’, and they had to abandon the test. He went back a week later and this time, they went into a different artery and located the damaged location that required a stent.

The stent procedure was booked for a week later. In the meantime, he experienced more chest pains and extreme breathlessness, so he was rushed back to hospital in Pattaya and was put on oxygen. He wanted to go home to await the stent, but he needed to obtain a supply of oxygen. A friend loaned him an oxygen bottle but guess what? He couldn’t get any oxygen as all the suppliers had closed up for Songkran – Thai New Year. Remember this, folks – don’t have a heart attack around Songkran.

Finally, a source of oxygen was located and he went home to await the operation. Guess what? The day before the operation was due, the hospital called to inform him that the high tech equipment they use to insert the stents couldn’t be cranked up after the New Year shut down. The operation was postponed – yet again.

I reckon my friend is very lucky to have survived all these stresses without having another, fatal heart attack.

Anyway, another week went by, while he awaited repair of the stent machine and stayed in bed at home, attached to an oxygen bottle. Finally, the hospital called to tell him the equipment was now fixed, (they had finally located the correct sized rubber band) and they were ready for him.

It is now a week, post op, and the poor guy is slowly recovering at home- some US$10,000 the lighter and amazed that he is still alive.

Now for my second friend – a shorter story, but still quite worrying. He happened to be working in Malaysia when he experienced severe abdominal pains and was rushed to hospital. They ran some tests and told him that they needed to remove his gall bladder. He called me and described his symptoms and I looked it up on the internet. I called him back and said that as far as I could tell, they were probably correct….

So they went ahead, and by all accounts just in time. The bladder burst when they were taking it out and the surgeon told my friend he was lucky to be alive. I was so glad that I had used the benefit of my wiki-medical knowledge to confirm their planned treatment. Good job I didn’t tell him to forgo the procedure….

Anyhow, he is now slowly recovering, (like friend number one) and flew back to Thailand a few days ago.

I have to say that living in Thailand with limited funds at your disposal is not the greatest place to be as you start to age and your body starts to break down after a hard life of dissipation. But like my friends, it is a little too late to turn the clock back. They say these things come in threes…. let’s hope the third event isn’t Mobi.

While I remained locked up at home – nice and dry – Lek and the two kids took off for a bit of local water throwing…. 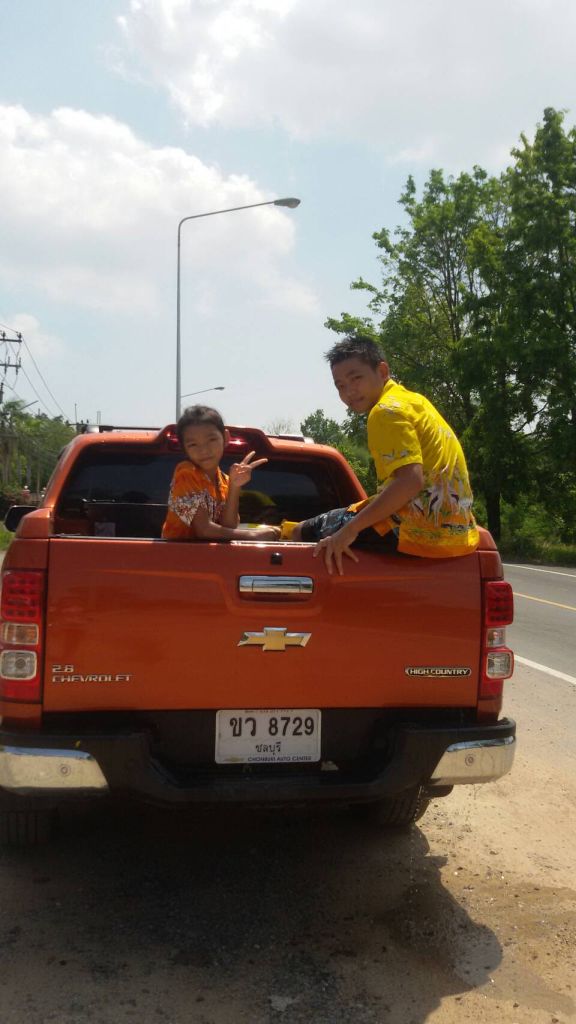 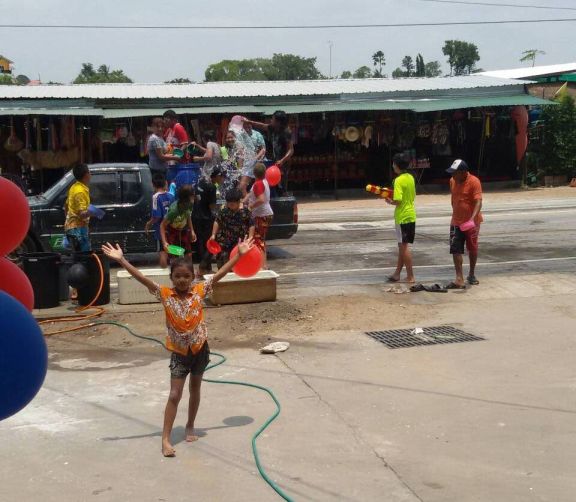