We’re still settling into our new abode, and we’re probably about 80% there, but now the remainder of the unpacking is continuing at a snail’s pace – as I always knew it would.

The rain is blessedly still with us. Most days we have some heavy showers, usually accompanied by thunderstorms. So the temperature is still relatively cool, (by Thailand standards) and we’re enjoying our ‘little winter’.

It’s school half term so Neung and Song are at home and every day we have a house-full. I’m starting to appreciate that as our new home is on two storeys, when we are all downstairs with our three dogs it’s a bit crowded – or at least, we are closer together than we were at the old house. Somehow, it seems like we are more of a proper family and there is more interaction.

Neung is a devil and he delights in teasing his young sister and then Lek gets mad at him and all hell breaks loose. He and his sister are always getting on the wrong side of their mother which provokes loud shouting matches in the Isan tongue, and this has become part and parcel of our daily lives. If I am watching television, I have to ‘pause’ the programme, and wait until the shouting comes to an end.

One day, I said very nicely to Lek: “Darling, can’t you scold them a little quieter?”

She looked at me as if I was crazy. “If I don’t shout, they won’t take any notice of me.”

My few words had clearly upset her as she went into a corner and sat staring at the floor.

Song came over to me and said in Thai: “Khun Mobi, Mummy is crying”

Then Neung got into the act. He thought it was hilarious. “Mummy is crying,” he said with a big grin.

I went over and took Lek’s hands and brought her back to sit with me.

“Really, Mobi – they don’t listen if I don’t shout at them,” she said.

Isan folk always talk to each other in loud voices – unlike Thais who are more softly spoken.

Many is the time when I have been out in an Isan village in the northeast of Thailand and have thought there was a loud fight in progress, only to be assured they were merely discussing something quite amicably.

In spite of all this shouting, the two kids love their mother dearly, so I guess it’s something I’ll just have to get used to.

She has never once in 5 years shouted at me.

The dogs don’t seem to mind…. 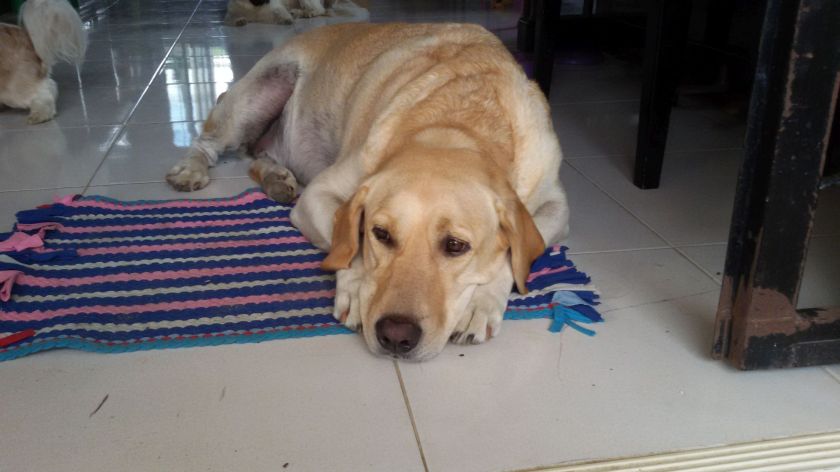 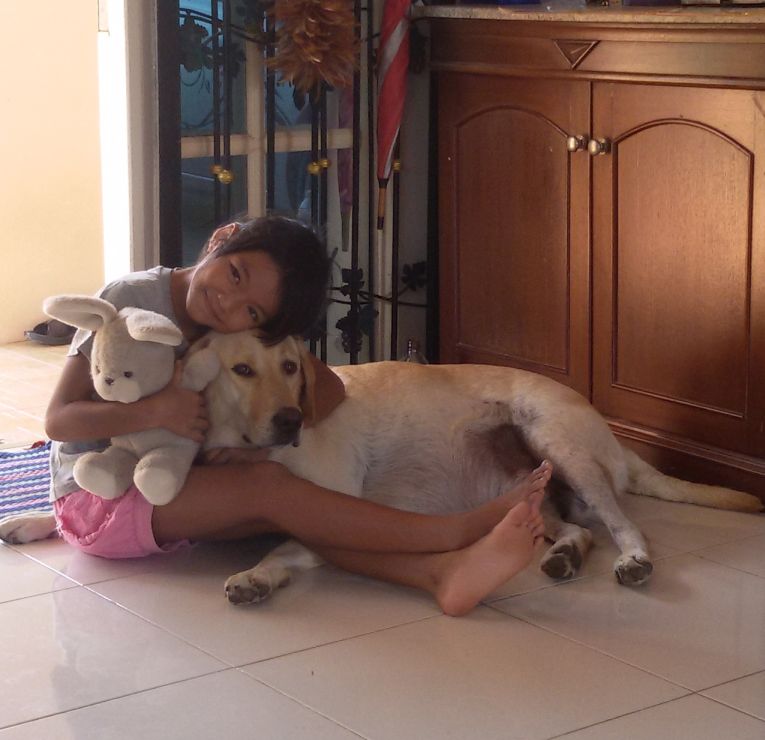 Meanwhile, back in the UK the PR people are beavering away trying to promote my book, “Azzy“ and trying to persuade professional reviewers to read it and write reviews prior to its release on Amazon-Kindle on 16th November.

There is little more I can do myself except to continue to promote the book in my own little social media circles and wait and see what happens.

“Azzy” is now available for pre-order on Amazon and the links to the book are:

In the meantime, I have made a start on preparatory work for the second novel in the series – i.e. the continuing story of Mobi D’Ark and his six wives.

The first part of the new novel takes place in the Middle East where, despite the dearth of single, available women, Mobi succeeds in unearthing a few rare specimens – one way or another… Then the action moves to Jakarta where he encounters a few too many for comfort….

I will probably get into the nitty gritty of actually writing the preliminary chapters within the next week or so, and I hope to have the first draft finished by next May or June.

Before I commence writing, I set out the barest outlines of the story, as I like to let the ideas, plots and characters germinate in my ageing brain as I go along.

There is nothing like actually putting pen to paper (metaphorically) to stimulate the creative process – at least, that’s how it works with me.

I always have a rough idea of how the story will start, of the significant events along the way, and how it will end; but more often than not, I veer off course, and my stories  go off in unplanned directions.

This also sometimes happens with my blog writing. A good example of this is my main blog article for this week, entitled “Dancing the American Smooth”.

It was originally intended to be a short piece on gun control and ended up as a longer piece on Obama and Hillary with a ‘touch of Trump’.

No mention of a gun anywhere. Maybe I’ll do gun control – yet again – next week.

Ass many of you are aware; I always enjoy watching quality television from both sides of the Atlantic. This week I watched the one finest piece of TV drama that I have seen in quite a while – certainly this year.

It was from our American friends at HBO who produced a wonderful 4-part miniseries entitled “Olive Kitteridge,” which was adapted from Elizabeth Strout’s Pulitzer-prize winning novel of the same name. This programme won no less than 7 “Primetime Emmy Awards”.

If you are like me and are fed up with all these fast action, sex-obsessed, violent dramas, full of one-dimensional ‘cartoon characters’ who mainly appeal to the intellectually challenged, then Olive Kitteridge may be just the series for you.

It moves at a slow pace but is full of interesting, utterly believable, fascinating people, and relates the tale of Olive and her husband Henry, through their marriage of 25 years. It doesn’t sound much, but trust me – it’s a breath of fresh air.

It seemed that I had only just sat down to watch the first episode when to my surprise and dismay, it was all over; so engrossed was I in a sad, witty, tragic, funny, endearing story of  an oddball couple, their family and friends.

It positively oozes class. Frances McDormand, who plays Olive, is a positive ‘tour de force’ and you can barely keep your eyes off her, waiting for her next cutting put-down or her barely disguised black and witty humour. As one reviewer commented, she’s not a million miles from Larry David’s character in the hilarious “Curb Your Enthusiasm”, but not as funny.

But there really wasn’t a duff performance from any of the superb, all-American cast.

One of the most satisfying aspects of this wonderfully acted, carefully paced, domestic drama was the fact that I could actually hear every single word that was spoken.

These days, I really struggle with most TV dramas, be they English or American because I find it very difficult to understand what is being said – no matter how loud I turn up the volume.

It is for this reason that these days I watch more and more foreign language films and TV with English subtitles. At least I know exactly what is going on, whereas most of the English language television and films leave me guessing to one extent or another.

Not that I mind watching European films and TV productions. They have been a positive revelation, particularly the Nordic ‘Film Noir’ TV dramas, and some of beautifully made French films that leave most English and American productions floundering in their wake.

Then there is the magnificent French cop series, “Spiral”, now in its sixth season. Spiral really is the best TV cop drama series that I have seen in my entire life, and series five was simply superb. I always knew exactly what was going on; even if I didn’t read the amusing Guardian ‘recap’ articles to tell me if I missed anything important.

I recently watched a British drama entitled:  ‘Midwinter of the Spirit’ which I thought was rubbish, but my enjoyment of it was not helped by the fact that I could barely understand 50% of what was spoken. Everyone was mumbling in a seemingly ‘foreign language’.

I know I’m not the only person to rail against this tendency to mumble and rattle off lines so fast – often in broad dialects; which means that many of us viewers of a certain age can’t make out what the heck the characters are saying. If so few people can understand the dialogue – What’s the point? I ask myself

Incidentally, I ‘discovered’ “Olive Kitteridge” when I was looking through a list of recent Emmy Award winners.

Another programme that was also well received by the “Emmy Award” judges was a TV series entitled ‘Ballers’, which was about American Footballers. Being a little partial to the odd bit of Grid Iron footy, I decided to download it and watch a couple of episodes.

Guess what? I could barely understand a word of what was being said.

In desperation, I downloaded the English subtitles and watched episode three with the subtitles.

Guess what? Now I knew exactly what they were saying, it was even worse than when I barely understood what was going on.

It’s all about a bunch of mainly black footballers, generally behaving badly: partying, taking drugs, screwing every woman in sight, (mainly white), and all manner of hangers-on trying to relieve them of their astronomically high salaries.

There wasn’t a single character – male or female – that you could empathise with. There was no one to root for and there weren’t even any anti-heroes – just a bunch of avaricious, vain, debauched ‘jocks’ of the worst possible kind. And after three episodes I was still waiting for some semblance of a plot…..

If anything, it was even worse than the apparently much acclaimed “Empire” a rubbishy drama-cum-musical about the black hip-hop record industry. Honestly, the plot-lines in both Ballers and Empire are not only corny but the dialogue must have been written by morons.

By all means promote black American culture – but these pieces of nonsense are not worthy of the word ‘culture’ – not even popular culture.