Laughter AND dogs are the best family medicine

The other night I watched a programme from BBC on the subject of how to choose the right dog. The dog expert went through all the attributes of different breeds, how much each one may cost, which dog would suitable for different dog owners, how much exercise they needed, whether they were good with kids, and so on.

The bottom line was that potential dog owners should take time and great care in selecting their dog – after all, they will be responsible for it for 10-15 years – maybe longer. One elderly couple had the bright idea of getting not one but two puppies – to the utter horror of the expert who talked them out of it. Another guy wanted a German Shephard, but he was away half the time, lived in a tiny house, and would leave the dog with his father every time he went away. Not a great idea…

You could imagine what I thought – as not one of my four dogs was chosen with a view to how they would fit in with my living circumstances. The two Shih Tzus were chosen by my ex-wife, who promptly dumped their daily care onto a servant, the Labrador was given to me by a desperate dog owner who was going back to England, and we rescued the bulldog from a home where he had been abandoned by his owner.

The only dog I chose with great care was my adorable Golden Retriever, Cookie, who died of cancer some two years ago.

As for the cost – it’s something I don’t like to dwell on, especially when at least two of the four are on constant visits to the vet and are permanently on some kind of medication.

Apparently my dogs need from 30 minutes (Shih Tzus) to 2 hours of vigorous exercise a day – but that is clearly impossible when the mercury is rising to over 40C for most of the day. Even so, we do take them out every day across the fields just before dusk where they have a good 30-minute scamper. They come back hot and exhausted, and that is quite enough in this weather. When it cools a little I will also take the Labrador with me on my evening walk. I think 30 minutes for the bulldog is probably enough.

are now responsible for feeding them), I don’t regret having so many dogs for one millisecond.

I don’t know where we would be without them. We get so much pleasure, joy, and love from having them around us, and they never fail to amuse us with their behaviour and antics.

I honestly believe that the dogs have helped to make our kids better children. They have been taught not to overly tease them and take proper care of them. It is clear that they derive as much pleasure from them as Lek and I do. They are always playing with them and laughing, and hugging them.

The dogs are usually the centre of attention and one or other of us is always relating tales of what they have been up to when the others weren’t around. Of course, they all sleep upstairs in the bedroom with us – the two little dogs on the bed and the two big ones on the floor.

For the past couple of weeks, our two kids have also been in our bedroom, sleeping on a mattress on the floor, as it’s the only room with air-conditioning. Every morning I wake up to see Sonny the Bulldog snuggled up on the mattress between the two kids and snoring away as though he’d been sleeping there all his life.

I have to admit that as far as the dog experts are concerned, we do everything wrong. Not enough 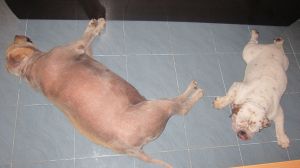 exercise, and little or no training – they train us – but we don’t care. We know they love us and we certainly love them. That’s all that really matters, isn’t it? As for the “leader of the pack” – Lek of course – they follow her everywhere, and when she goes out they sit at the door awaiting her return. 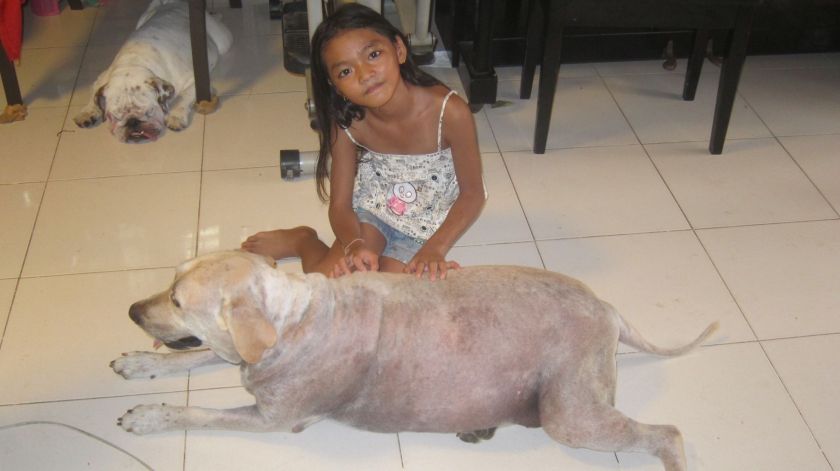 It’s been a tough couple of weeks on the work front, and I now realise that I have probably bitten off a bit more than I can chew.

It all started when one of my friends in Pattaya introduced me to a gentleman who was looking for someone to re-write his website. We duly made contact, and to cut a long story short, he agreed for me to carry out the assignment. A week later I sent him the first draft and he was very happy with it.

That is where I should have left it – but as I have always been a frustrated website designer/programmer, I offered to load up the content onto a new website for him. I know nothing about HTML or CSS code which is necessary for building websites, but I thought I could do a pretty good job by simply using one of Word Press’s hundreds of ‘ready-made’ themes.

The first step was to find a theme, load up the content I had written and show it to my client and see if he would give me the job. He quite liked it but needed a number of changes made to the website, and although I could handle some of the customization, the rest would only be possible by using CSS code and even a bit of HTML.

I decided it couldn’t be that hard, so quoted him a low price to get the job and then find out if I could do it. I know… fools rush in…

Bad move – that was ten days ago and I’m still at it. At first, it all went well, as he liked the theme I had chosen and using my newly acquired CSS and HTML skills, I was able to customise it sufficiently to satisfy him.

However, he felt that  the home page left too much blank space on the left-hand side of the block text. Everything else was great. So I spent 4 days trying to move the text over to the left, without success. The design was hard coded that way and it was impossible to change.

Three different themes later, I was still trying to find one that would do the job. I finally settled on a theme which seemed to be sufficiently customizable, using my limited coding skills. By Friday (the day of the deadline to deliver) I was almost there – but not quite. The coding skills that are required to fix the remaining problems are totally beyond my competence.

Never mind, I thought, I’ll just send off an email to WordPress and ask them to send me the necessary code and by Monday, I’ll have it done. Then came the reply – they cannot help me with the code; I have to request help on their help forums.

Been there, done that – no replies.

So I’m stuck. I can’t finish off the website, after ten days of hard work (sometimes up to midnight and all last weekend) and I now have to suffer the embarrassment of telling my client I can’t do it after all.

And there I was, hoping that this website, if successful, could be the start of a whole new career….

I’ll give it another go on Monday, but if I can’t crack it in one more day, it will be time to give up.

I still have a little writing work trickling in from my client in London, but the promises they had previously made of regular work seem to have almost dried up. It seems the stock markets are doing very badly right now, and it is not a good time to splash out on copywriters.

The work has also dried up from the agency website I was using – I have no idea why. I have submitted a lot of quotes – some of them very low, but not a dribble. Worrying times – but at least nobody can accuse me of not trying.

Whoever would have thought I would be trying to learn computer code at the age of 70? Not me, for one!

To make matters worse, as I’m writing this, there has just been the loudest clap of thunder I ever heard in my life. The lightning was directly overhead and it has just fried my modem – so no internet…..now I’m not even sure if I will get this blog out, let alone work on my client’s website tomorrow….

Update – as you now know, my blog didn’t go out. It’s noon on Monday and still no internet, but I have had promises for this afternoon, but at the moment, another thunderstorm is engulfing us. Near gale force winds and a very dark sky, with thunder and lightning all around…the dubious pleasures of living in paradise.