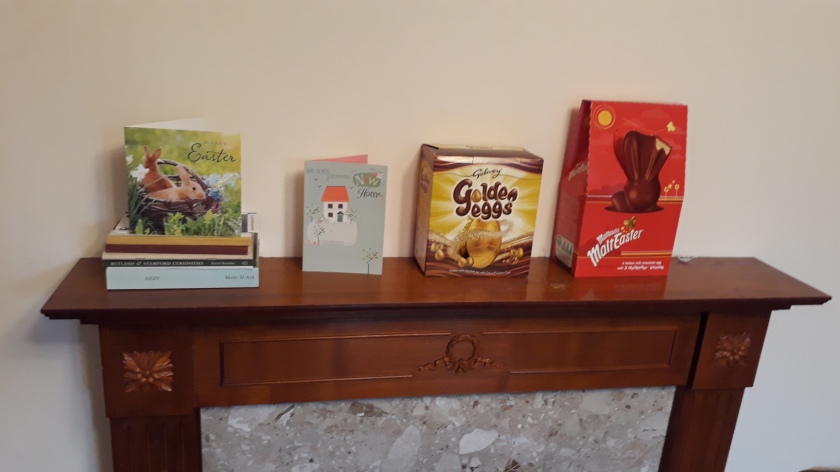 It’s over a month since I last blogged and I guess some of you must have wondered what has been happening in eventful little life. Suffice to say that getting my family settled in England amidst the snow and arctic conditions of early March has been occupying a great deal of my time.

From my horrendous journey to Heathrow to pick up Lek and Song, to finding somewhere to live, to undertaking a multitude of tasks, has kept this old codger well occupied and away from his computer.

As I hinted in my last blog, the night of 1st/2nd March will go down in the annals of British weather history as the day the ‘beast from the east’ (Siberia) enwrapped Blighty in an icy blast of snow and ice.

It was on this very day that my family were due at terminal three at 5.30 a.m; so I decided I had better get on the road pretty early, in case of weather hold-ups, and boy, am I glad that I did. I left around 2.00 a.m. and found the roads through the Rutland countryside piled high with snow and I gingerly slip-slided my way along the snow-covered rural roads at no more 15 mph.

The plan was to join the  A1 road at Stamford, which I had hoped would be relatively clear of snow – given that it is one of the main arteries from the North of England to London.

Thank God I was the only car on the road, and after a hair-raising drive to Stamford, Google Maps decided to re-route me onto further rural roads and bypass the A1 completely.

I could only assume that the A1 must have been blocked so I followed the GPS along yet more snow-bound rural roads, which in some parts were banked very high with snow being blown in from the surrounding fields by fierce easterly winds.

After hours of perilously maneuvering my little car from one village to the next, I came to a particularly high drift across the road which forced me to grind to a halt. It was here I met my first vehicle of the night coming the other way. He was stuck, as was I!

I got out and helped push him out of the drift and he reciprocated.

Somehow, I finally ended up in Northampton Town high street. It was as quiet as a mouse –not a soul in sight – and dozens of cars were almost submerged in snow, abandoned along the sides of the roads.

At the end of the high street, I was directed by my GPS to turn right onto a road which had a sign stating ‘not suitable for large vehicles’. This meant that the road was probably more of a country track than a proper road, and it would clearly have been suicide to continue in that direction.

I retraced my back to the town centre and opted for a side road that had a signpost listing various destinations, including the M1 in brackets at the bottom of the list. I decided it was my best bet, and about 45 minutes later, after risking life and limb on a precipitous, snow-bound minor road, I finally made it to the M1 motorway, which also led to London.

I still had a long way to go and by now it was coming up to 4 a.m. fortunately, the M1 was more navigable than the rural roads and the centre lane was just about driveable. I put my faith in the Gods and put my foot down a little. I could hardly see as the windscreen was covered with freezing ice and snow and the windscreen washer mechanisms were frozen hard.

Visions of Mobi being found frozen in the middle some snowdrift, and little Lek and Song abandoned at Heathrow plagued me during my scary journey.

How I made it I will never know, but at around 6.15, I finally reached Heathrow terminal 3 car park. Five minutes later, as I wearily entered the arrivals lounge, my two happy travellers emerged from customs with smiles beaming all over their tired faces.

I was quite a reunion after being apart for 10 months, and eventually, we wended our way towards the car park entrance. “Wait here!” I told them, as I went to wrestle with the parking machine to extract a ticket that would let us out, but when I turned around, the luggage trolleys were unattended and they had both disappeared!

WTF! Where have they gone? Kidnapped? Surely not.

I looked around me in despair and after a few seconds, I saw them running back towards me.

“We went to find snow,” they said in unison.

I looked ahead and sure enough, just outside the covered area, there was a mountain of snow.

They’ll soon get tired of that!

The journey back to Rutland was another epic, but not as bad as the outward journey. It was still snowing, but this time it was daylight, and I stuck to the main roads. My two passengers, completely oblivious of the dangers of getting stuck in the snow, were busy admiring the snowy landscape and taking pictures. It was all very pretty and awe-inspiring – provided you didn’t have to drive through it all in a tiny car that wasn’t built for sub-arctic conditions.

We arrived in Oakham about three hours later, and despite not having had a proper sleep for over 24 hours, their enthusiasm for the snow remained undiminished. We had barely got inside my daughter’s home before they were out in the garden with my grandson and son-in-law, playing and frolicking in the sub-zero conditions. 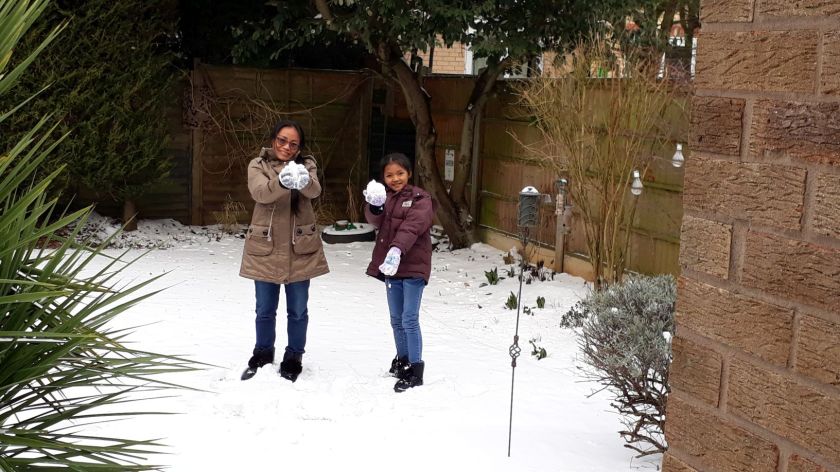 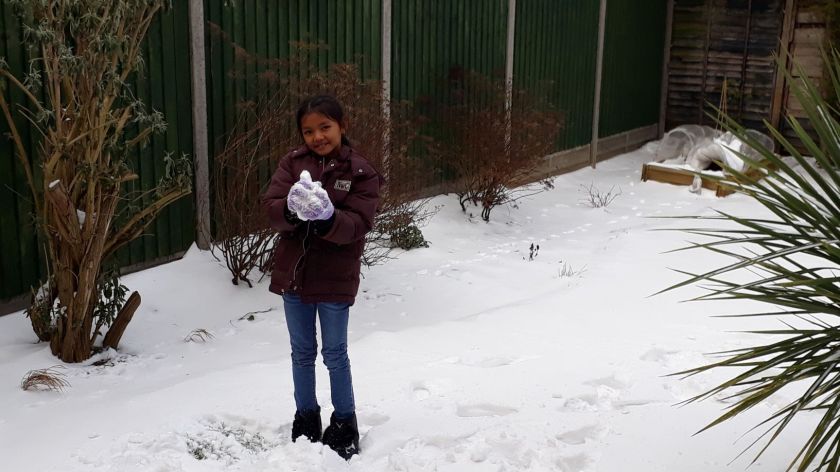 Thais! Who would have thought it?

This is not the first time I have brought Thais to England, and I must admit that my previous experiences had left me totally unprepared for the manner in which Lek and Song have since embraced all things English – especially the climate and food.

I came to the UK with one of my previous wives to England back in 1982 – also in the heart of winter – when my father died. On that occasion, there was also snow everywhere underfoot, and my then wife spent almost the entire 3 weeks we were in England in bed at my brother’s house. She complained it was too cold to get up.

Then wife number 5, who came with me for a holiday in England in the middle of summer, complained about the cold and the food. We were due to stay a month but went back after 3 weeks as she missed Thailand too much.

So naturally, I was fearful. Although Lek had already been with me to England twice during the summer and liked it very much, I wasn’t sure how she would take to the cold weather.

The simple answer is that mother and daughter are tolerating it better than I am. They have been out and about in the cold rain, snow, and gale-force bitter winds and are perfectly happy.

The speed in which they have adapted to life here is truly astonishing. Lek is driving our little Peugeot around England like a native, (even though she had only previously driven automatics), and although we have been eating a fair amount of home-cooked Thai food, they have both enjoyed English meals – everything from breakfast cereals, sausages & mash, sandwiches and a whole load more besides. On Easter Sunday we are having roast lamb, Yorkshire pud, stuffing, veg, gravy, and all the trimmings.

(Thai wife number 4, who has now lived in England more than 30 years -the one who refused to get out of bed for 3 weeks- still refuses to eat potatoes and still insists on rice with every meal.) 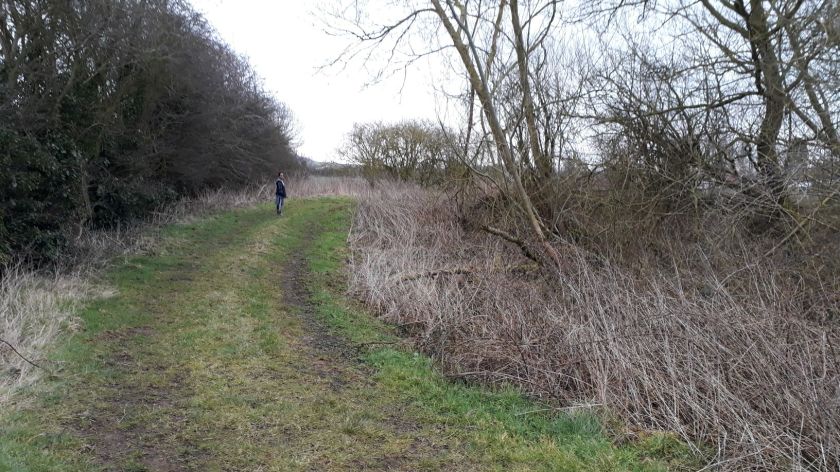 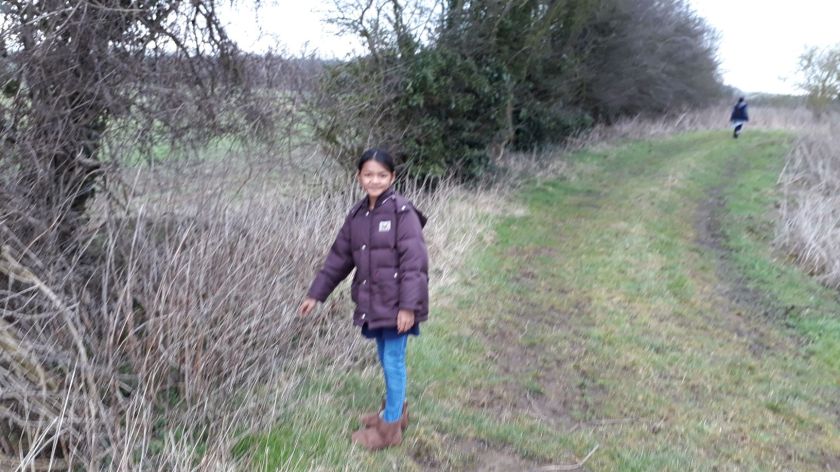 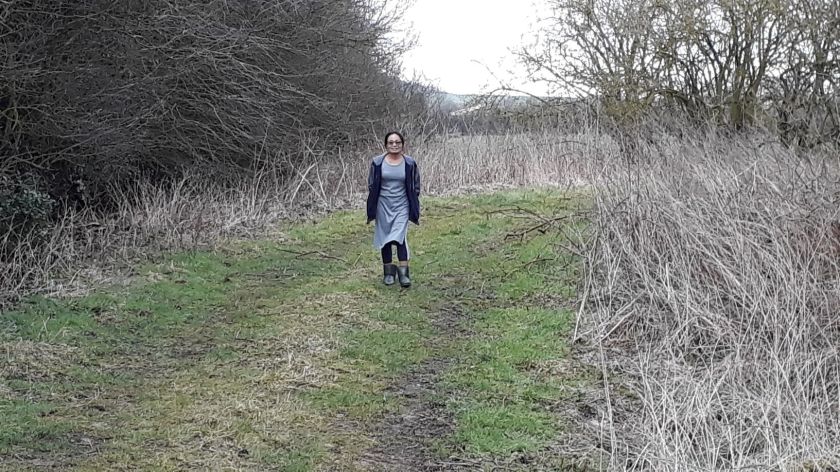 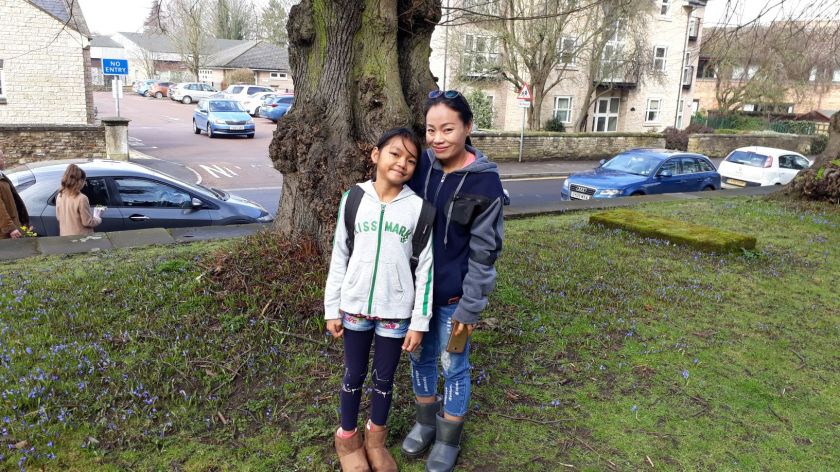 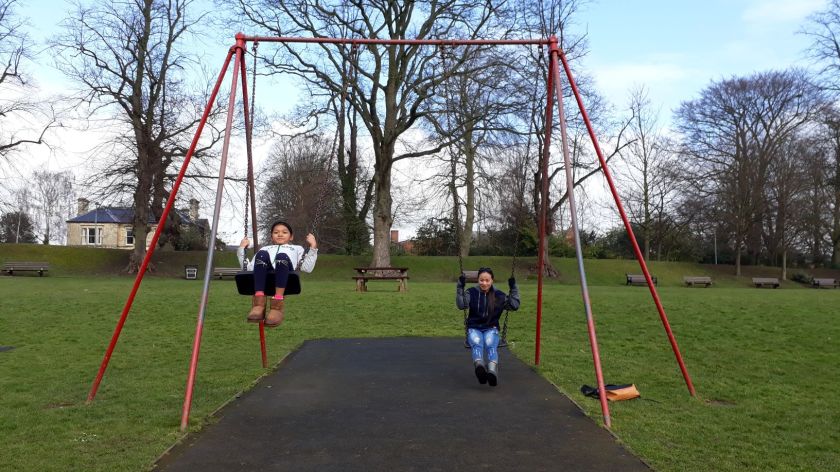 Then it snowed – AGAIN!

Lek and Song have only been here a mere 28 days, but it seems like 28 weeks – so much has been achieved. Here’s a little list of some of these achievements, in no particular order:

We have been out and about quite a bit. To Leicester twice – the first time to pick up the resident permits from a post office there, and the second time for shopping. We have also been to Peterborough, Corby and Melton Mowbray (the nearest larger town) on a number of occasions for various things that are not available in Oakham.

Our little Peugeot piled up to the gunnels

The charity shops are great for cheap clothes, as are places like Primark, Asda etc. for clothes and other household products. If you know where to go, you can live quite cheaply in England. 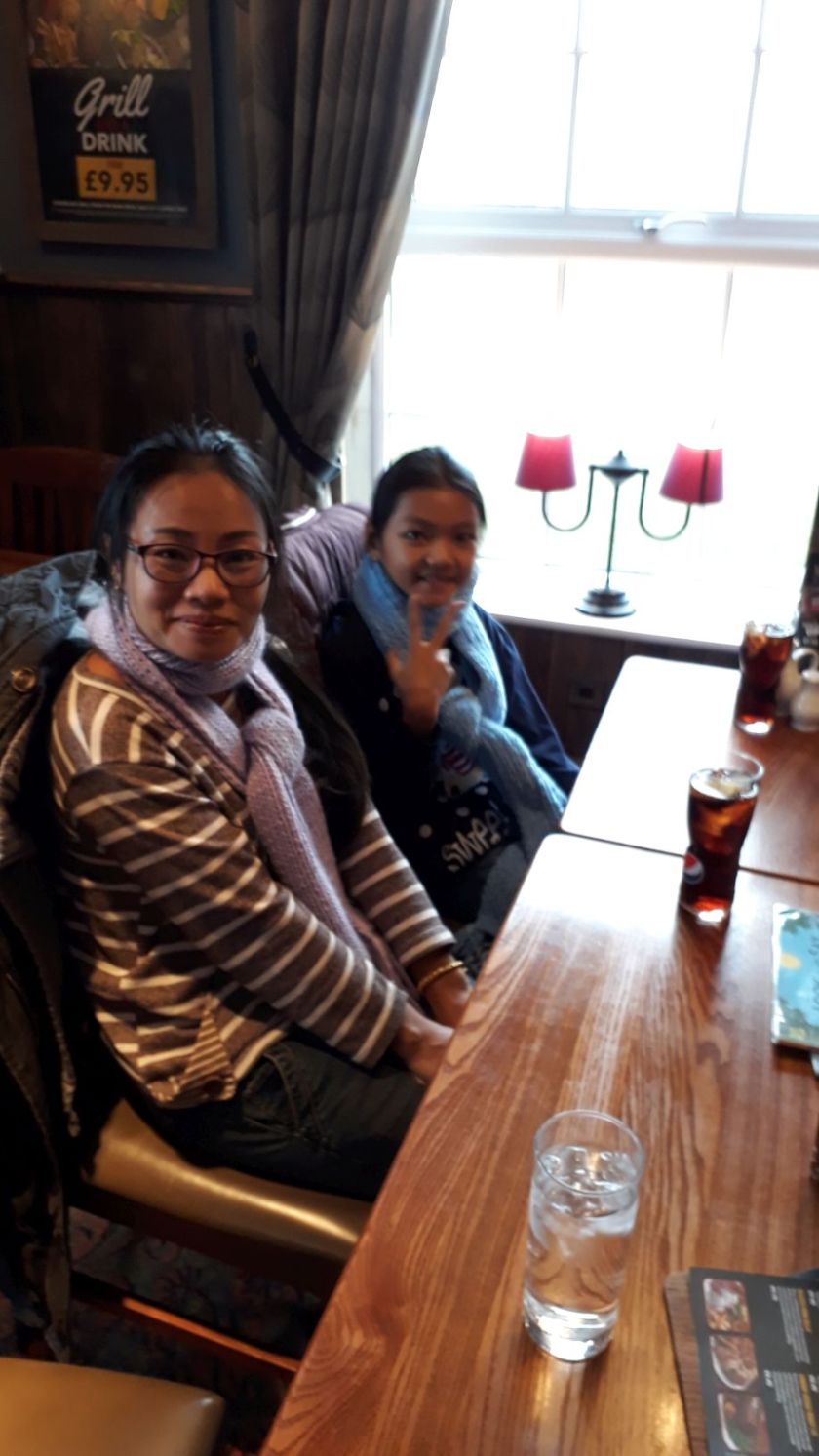 Mercifully, up here in the East Midlands, we are spared the horrendous traffic jams that abound in the South East, and we are surrounded by some of the most beautiful countryside that England has to offer. Lek is a country-girl at heart and she loves the rural setting. I am sure that one day we will end up living in an old village cottage.

All in all…so far so good. Everything has gone like clockwork and our situation couldn’t be better. It is the most positive I have felt about life since that dreadful day, six years ago, when I discovered that all my savings had disappeared in a global investment scam.

It’s a far cry from a couple of months ago when I really believed the visas would be rejected and we were destined to live part forever.

We are now looking forward to the English spring and all that has to offer – warmer weather, the trees in blossom, and the spring flowers starting bloom.

Spring is my favourite time of year – Bring it on…

STOP PRESS!!! – More snow is forecast for Easter Monday – The English weather is nothing if unpredictable…at least it keeps life interesting.

Here’s a few pics of our new home: 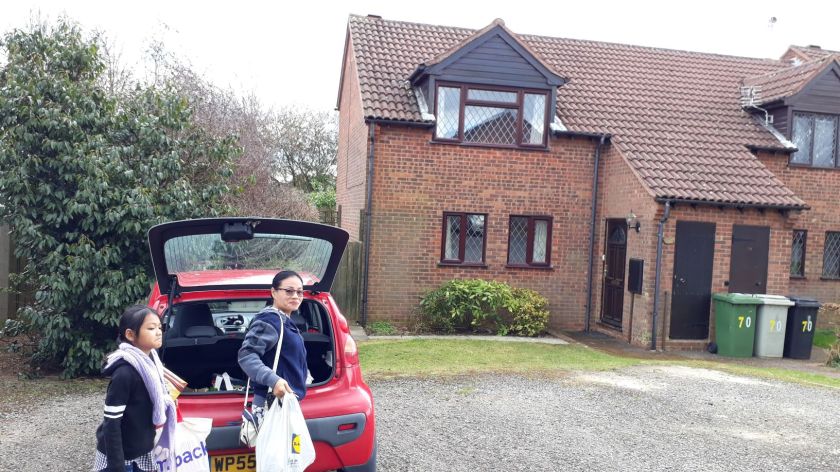 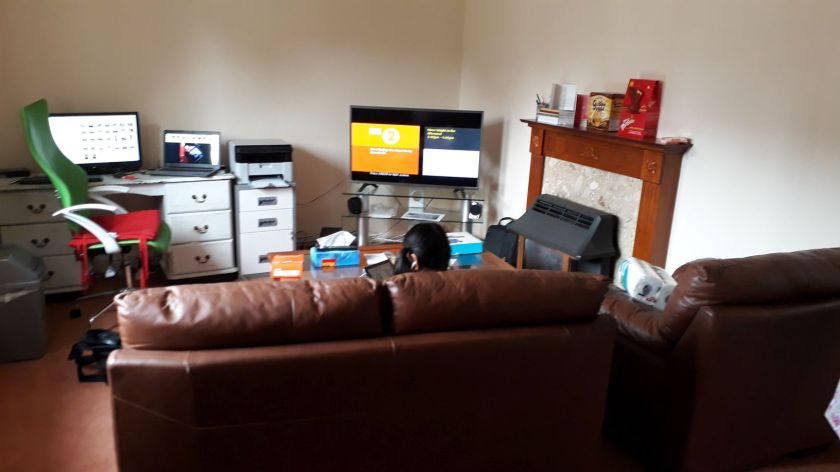 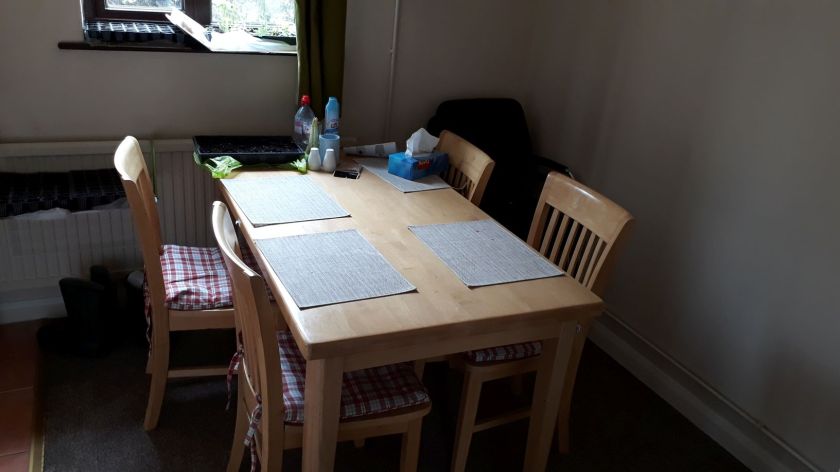 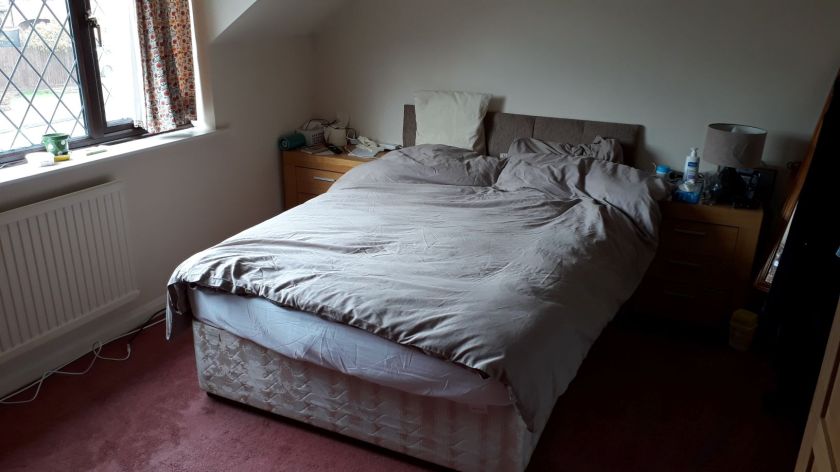