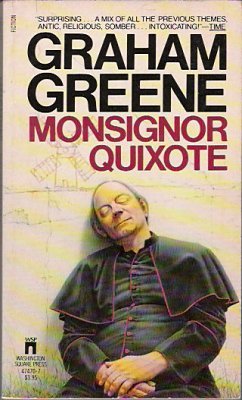 A Minor Masterpiece – or just an Amusing Romp?

Graham Greene was already well established as a towering figure of 20th Century literature by the time he got around to writing Monsignor Quixote in 1982 at the age of 78.

I get the feeling that with all his great literary works behind him, he decided to embark on a little piece of whimsy – something he wrote for the sheer enjoyment of writing, rather than to put his mark on yet another stylish masterpiece for the intelligentsia to devour and purr over.

Whether or not I am correct in this, what a lovely, affectionate little story it has turned out to be, full of humor, a touch of pathos, a wonderful introduction into the world of semi-fascist Spain and a roster of utterly fascinating characters.

Indeed, you would have to go a long way to dream up a more unlikely plot for a story.

Set in the late 70s, in post-Franco Spain, Father Quixote is an elderly priest and his parish is El Toboso, a small town in Spain’s La Mancha region. This well-meaning, gentle and pragmatic gentleman regards himself as a descendant of the legendary Don Quixote – Miguel de Cervantes’s fictional character of the same name, who lived in the 17th century.

Father Quixote even calls his ancient Seat 600 “Rocinante”, after 17th Century Don Quixote’s horse, and the communist ex-mayor of the town, soon-to-be traveling companion, he names Sancho, after the legendary Squire in Cervantes’s novel.

By a strange twist of fate, this inept but good-hearted priest helps out a passing Bishop from Rome whose car had broken down, and he is rewarded by the Pope himself by being promoted to “Monsignor”. This is much to the chagrin of his local Bishop, who regards Quixote as an inept priest who doesn’t always follow the rules, and he reluctantly agrees to let the newly created Monsignor take a holiday before transferring him to a more auspicious post – more befitting his new, unwanted rank.

The scene is set for the good priest and the ex-mayor to embark on a voyage of discovery across Spain, much as his fictional forebears had done before him, some three hundred years earlier.

At this point, I did become concerned that the book would descend into a battle of words and dogma between a committed communist and a true believer, and frankly at my time of life I have no desire to go over these old debating theological battlegrounds again.

But I was wrong. Sure, these debates did occur – frequently – but they are so delightfully offbeat and whimsical, that no person – be they communist or devout catholic could take umbrage from what was discussed, and the opinions stated. This is provided, of course, that they approach these dialogues with an open and not too serious turn of mind.

The two unlikely companions’ travels across the country are outrageous and extremely funny. Every afternoon, they find a nice spot outdoors to get drunk on local wine; the Father and Sancho spend a night in a brothel; they see an adult sexually explicit film in a local cinema; the priest aids the escape of a thief; and much more besides.

One of the most amusing incidents concerns the pair being questioned by the police just at the moment when “Sancho” the communist is trying on the Father’s priestly collar and sartorial accouterments to check if it cools down his neck and shoulders.

The poor priest is eventually kidnapped by the “Bishop’s men” and returned to his home in El Toboso, and locked in his bedroom. With the aid of his housekeeper and a young local man, “Sancho” comes to his rescue and they resume their adventures in rural Spain. But the police are closing in at every turn.

The end is a tragic comedy. But in its tragedy, it makes us think and question the religious pomposity and humbug that exists the world’s organized religions, as well as forcing us to take a hard look at the equally hypocritical political dogma that propped up the harsh Communist State which controlled half of Europe.

And let’s not also forget 1970s Spain that was still under the unbending thumb of state police who hadn’t changed very much since their fascist leader’s recent demise.

Catholicism, Communism and Fascism, all wrapped up in a lovely, amusing little adventure.

We delight as much in the descriptions of our two venerable protagonists savoring the local Spanish cooked meats and cheese, and washing it down with copious amounts of unlabelled, cheap and delicious local wine, as we do about the comic discussions on the state of the world’s religions and political systems.

What a wonderful little book – it is indeed a masterpiece, although I doubt Greene regarded it as such.