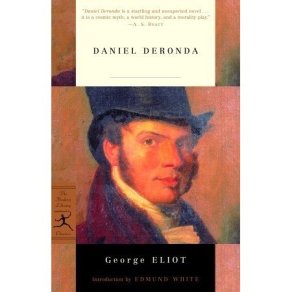 ‘Deronda’ was George Eliot’s final novel and was the only one that dealt with the contemporary Victorian society of the day.

The novel has been widely acclaimed as a masterpiece and is consistently rated as one of the 100 best novels, although at the time of publication it was widely criticized and was a great disappointment many of Eliot’s Victorian readers.

It was also extremely controversial, as part of the narrative dealt with the hitherto taboo subject of the Jews in Europe and their early Zionist struggles

Yet it was because of the so-called “Jewish element” that the novel was immediately translated into German and Dutch and was widely acclaimed in those countries where there were much larger populations of Jews than in England.

The first is about Gwendolen, a stunningly beautiful, but impoverished young lady of the upper classes who is arrogant, selfish, and somewhat unkind, but due to a further collapse in her family’s fortunes, she feels obliged to marry a rich heir. Her lordly and equally selfish husband proves more than a match for Gwendolyn and he treats her quite badly and largely succeeds in snuffing out her willful independence.

The second tale concerns an attractive and impoverished Jewess who was taken from her mother and brother by her self-seeking father. He takes her abroad, ill-treats her and puts her on the stage to make money. When she realizes he is about to sell her into prostitution, she flees back to England to seek out her long-lost family.

Our gallant hero is Daniel Deronda, a handsome young man who is raised as a gentleman but with no knowledge of who his real parents. He is a man of great compassion and a yearning to make something meaningful of his life.

Daniel meets Gwendolyn both before and after her calamitous marriage and saves Mirah, the young desperate Jewess from killing herself when she fails to find her family and becomes totally destitute.

The two stories have several cross-over points. Daniel introduces Mirah to high society as an accomplished singer who starts to grace their parties and ‘get-togethers’.

Daniel becomes emotionally attached to both Gwendolyn and Mirah.

The novel is jam-packed with fascinating characters, both from the upper classes, the middle classes, and the Jewish working classes and there far too many plot twists and turns to elucidate in this review.

Towards the end of the book, after striking up a deep spiritual friendship with Mirah’s brother, Daniel meets his long lost mother and discovers that he is, in fact, a Jew himself. He rejoices in this revelation and vows to spend the rest of his life in helping his fellow Jews seek a land where they can settle.

Gwendolyn is released from the tyranny of her rich husband when he is killed in a boating accident, but she becomes inconsolable when she realizes that Daniel loves another. But by now she is a much-changed woman. She realizes how selfish and unkind she had been before her marriage and is resolved to bear her unrequited love with fortitude and to live a virtuous life.

Upon discovering he is a Jew, Daniel declares his love to the enchanting Mirah and their marriage takes place only few days before Mirah’s long-suffering brother succumbs to tuberculosis.

Trust me, there is so much more to this story than contained in the all too brief outline above.

I must declare a special interest in this novel as it was at the age of 21, that I too discovered to my astonishment that my own father was a Jew, something he had hidden from his children for all of our lives.

‘Deronda‘ is beautifully written and Eliot is at the very top of her game as she spins her fascinating Victorian tale which contains many wonderful, three-dimensional characters – representing all shades of morality and the societies in which they lived.

However, there is one serious drawback. I imagine that If Eliot was presenting her manuscript to a publisher today it is highly likely that they would say something along the lines of:

“Wonderful novel, George, but we suggest that a little trimming of the text may be in order.”

I confess that the book was to some extent spoiled for me by the pages upon pages of uninteresting and unnecessary reflections by the main protagonists, and even by some of the minor ones.

I would be the last one to complain if there was a paragraph… or two… or three which delved into the thoughts, emotions, motives and intentions of the novel’s characters – indeed this is very necessary to fully appreciate the story. I could even accept a page or so of such meanderings from time to time.

But in my humble opinion, Eliot simply goes too far. On many occasions, just as the reader is anxious to get on with the next phase of the story, they become utterly bogged down by page upon page of circumlocution and introspection about the characters’ thoughts and desires.

I confess that after a while I started to skip much of this, as after a page or two I found the remainder not particularly pertinent to the story – not adding anything that I did not already know and appreciate about the protagonists concerned.

In a word – I found much of it to be unnecessary padding.

I wonder if Eliot deliberately set out to pad her book? It was originally published in installments in a magazine, as was the custom in those days, so maybe it meant the publisher could make more money this way.

Whatever the reason, it didn’t work for me and I can’t recall anything like as much padding in her other masterpieces – Middlemarch and Brideshead Revisited. Or maybe she just made a better job of it and it held my attention. Or maybe I’m getting old and my mind wanders…

Either way, it is a shame, for if a good chunk of this superfluous writing was removed, Daniel Deronda would be an even a greater novel.

Even so, I will still give Daniel Deronda four stars out of five.