For those who are wondering, I’m trying to get back into a weekend blog publication schedule, hence the ten day break since my last blog.

I have been quite busy of late, getting the details of my house to Pattaya estate agents and working on the final edit of my novel.

I have been almost overwhelmed by the interest shown by agents I have contacted during the past week, as in the past they rarely even bothered to acknowledge my request for a listing, let alone express any desire to visit and photograph the property. But now, every agent I have contacted has called me within ten minutes to make an appointment to view the property. I don’t know whether this is due to an increase in the number of potential buyers, or the reduced price I am now asking, or maybe a combination of the two. Either way it is certainly a welcome development so wish me luck folks!

I am also making great strides in finishing off my book, and I am  getting through 2-3 chapters a day. I reckon I am now only a week away from completing this exercise after which,  I am still undecided whether to print off a copy and give it one final read, or just call it a day when  the current go-around is complete.

I will report back next week.

We left Thailand on July 24th for our long planned trip to Blighty, and returned on 16th August, spending some 23 days in England followed by 2 weeks ‘vacationing’ back in Thailand going out most days  with my youngest daughter and her husband.

During the next few weeks I will relate my adventures through the countless pictures that we took, along with a few pithy, mainly light hearted comments.

I do hope you enjoy it, and today I will kick off by describing our departure from Thailand, our transit at Moscow airport, and the first couple of days with my brother in Tonbridge, Kent.

My trusty mate Mick and his lovely lady picked us up from our home in Pattaya at the crack of dawn (5 a.m.!!!) and took us to the airport where we discovered that we were the only non-Russians who were flying to Moscow at such a crazy hour of the morning. It was a bit disconcerting that a vast majority had got up even earlier that we did. Or maybe they hadn’t slept.

We were feeling fresh and raring to go, whereas the rest of the passengers looked distinctly weary and hung-over; presumably dreading their return to the harsh world of Putin-dominated, modern day, totalitarian Russia.

We checked in without incident and were then somewhat confused by the badly signed new security system which required us to take an escalator aloft for the hand baggage, belt, shoes, and personal body checks, and  to make sure we weren’t carrying any bombs, guns, grenades or chemicals of mass destruction in our bottles of fake Calvin Klein deodorant. After retrieving my jeans from my ankles, we took the escalator back down to the departure floor to go through passport control. 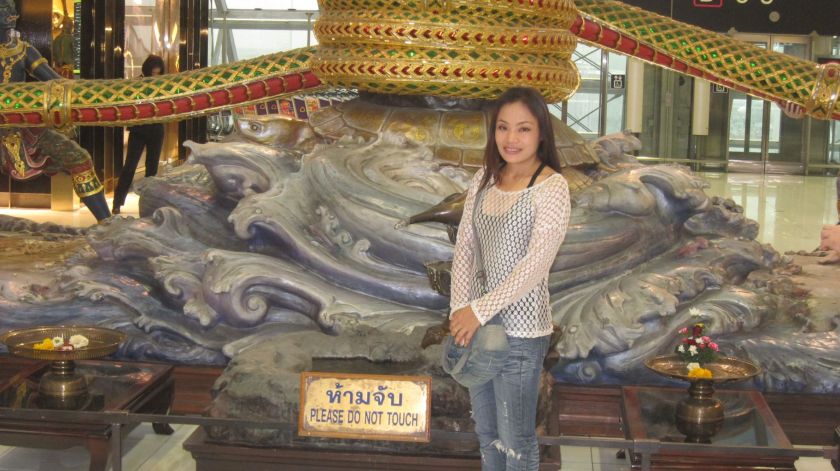 As you can see, Noo made it into the departure lounge for her first ever trip out of Thailand, and indeed her first ever flight. Not sure if the ‘Do not touch’ sign refers to the weird snake-type sculpture or the beautifully sculptured  Noo. I’ll settle for Noo. 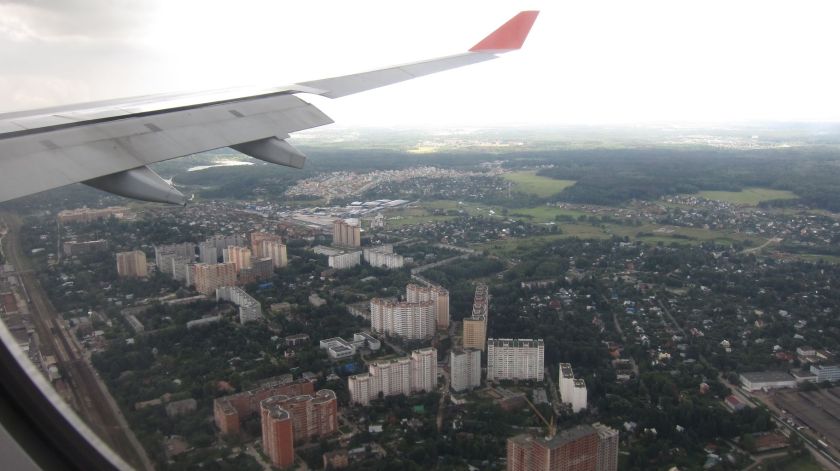 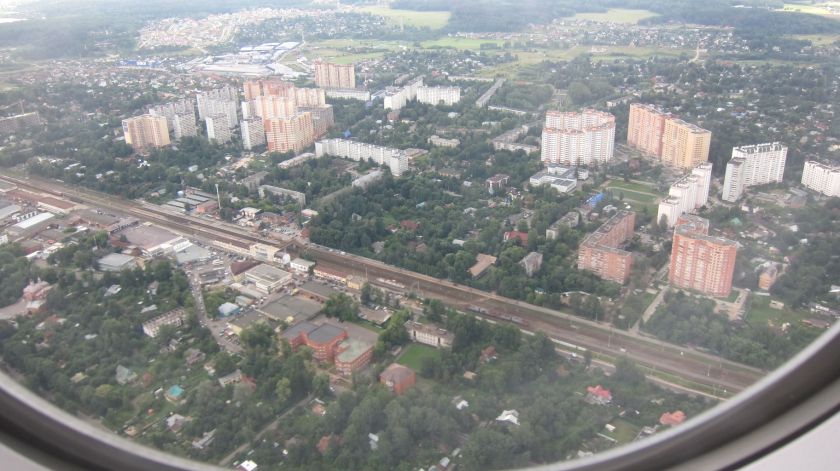 We had good seats (Window and aisle) and for the first time that I can recall I had an unobstructed view. Noo took to flying like a duck to water, and as you can see, was soon snapping away. The plane was packed to the gunnels but the friendly Russian cabin crew did a sterling job and we received two quite palatable meals on the first leg to Moscow. I did wonder how the staff seemed to instantly know that I wasn’t Russian as they all addressed me in nigh on unintelligible English. One of life’s great mysteries;don’t I look Russian?? 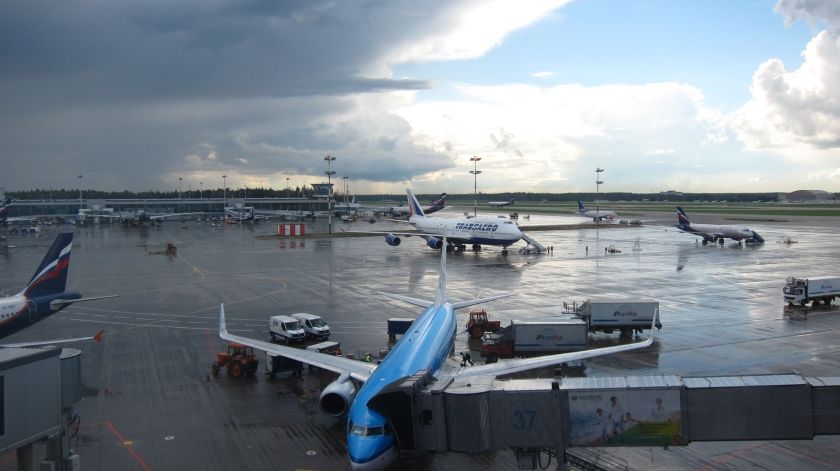 Transiting at Moscow commenced with yet more farce as once again we had to remove out belts, shoes, wallets, chastity garments and God knows what else. Supervising proceedings  was a short,  rotund, middle-aged Russian matriarch who shouted at every passenger in Russian to strip down and throw all their things in trays which were mysteriously hidden from view.

She gave the impression that she would instantly shoot anyone who failed to obey her incomprehensible instructions. Then one poor man, who had been so chastened by the x-ray and body search process that he forgot to collect his hand baggage at the other end. As he vanished into the departure lounge, chaos ensued. He was eventually dragged back and to everyone’s astonishment, the modern-day Rosa Klebb burst into paroxysms of laughter. She seemed to be saying: ‘What a silly-billy westerner, to forget his prized possessions. Whatever could have made him do such a thing!!’

We kept young Ed Snowdon company for 4 long hours at Moscow airport and it was only at the last possible moment that a dementia-ridden Mobi realised that we had been sitting in the wrong terminal. We had to hot-foot it for bloody miles and almost missed our plane.

We arrived bang on time at Heathrow. There was a new system for Brits and I had to put my passport into a do-it-yourself scanning machine.

‘Just like at Tescos’ the three giggling immigration  officers told me as they stood and watched exhausted passengers trying to cope with the latest multi-billion pound immigration technology. I had to put my passport in 3 times – the last time assisted by one of the grinning officers when the entrance gate suddenly swished open and I was back in the land of my birth.

I quickly sought out Noo, who had just reached the front of the queue in the ‘non-EU’ line. She handed the officer the papers that I had carefully prepared for her which roughly said:

‘Hello, I am Noo, I am here for a holiday with my partner Mobi and I promise faithfully not to over-stay and never to engage in prostitution – well not for financial gain any way….. (or words to that effect)…

The immigration officer looked at Noo and then spotted me waiting at the barrier and beckoned me over – back into no-man’s land again. We had a long chat and I assured her that we really did live in Thailand and had far more to lose than gain by not returning to our home in the sun. She gave me some long hard looks and decided that I must be telling the truth and eventually let us in.

(Don’t forget that this was after a three month visa application process in Thailand in which we had to provide two tons of documents, including our life histories and details of our financial transactions since birth, including the days when my Dad used to put a shilling a week in my post office savings book and Noo’s parents put fifty stang a month into her china monkey piggy bank.)

By some miracle, our bags were already on the carousel, and despite the slight delay at immigration, I have to say this was the quickest I have ever got out of Heathrow. My brother, Sid and his wife of nearly fifty years were waiting for us and in no time flat we were whisked off to their home in Tonbridge, Kent where we were to spend the first 10 days of our stay. 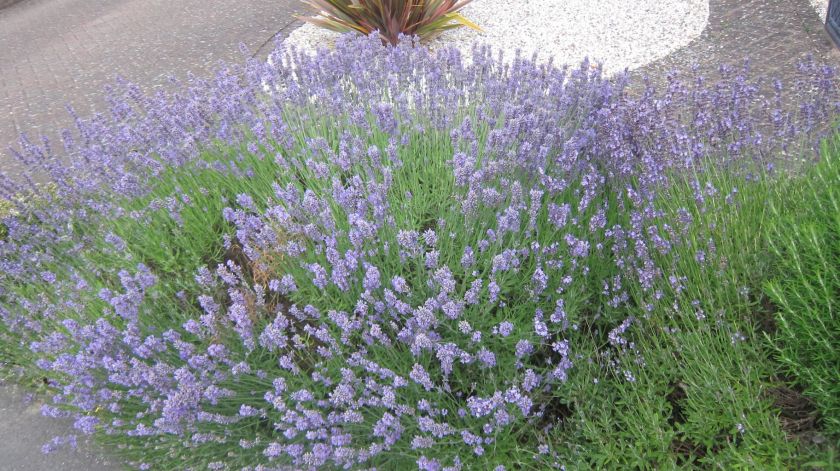 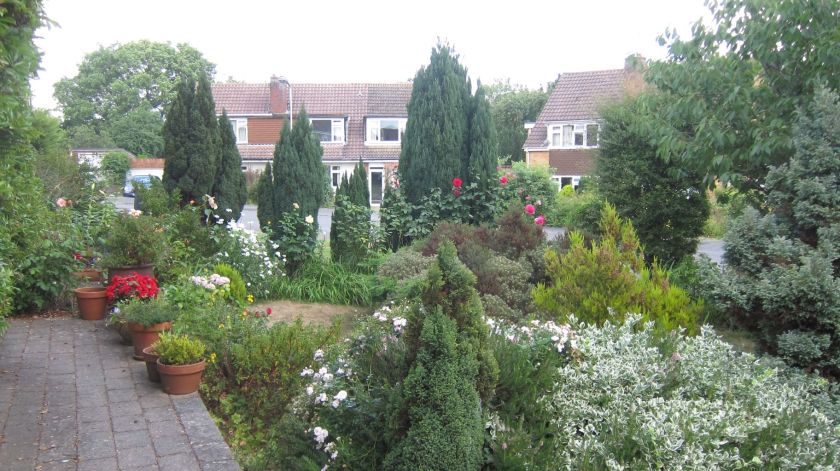 It was July, the weather had been great and Tonbridge was a profusion of summer grass, shrubs and flowers. We went for a walk in Suburban Tonbridge and Noo found a letter box on the local green. 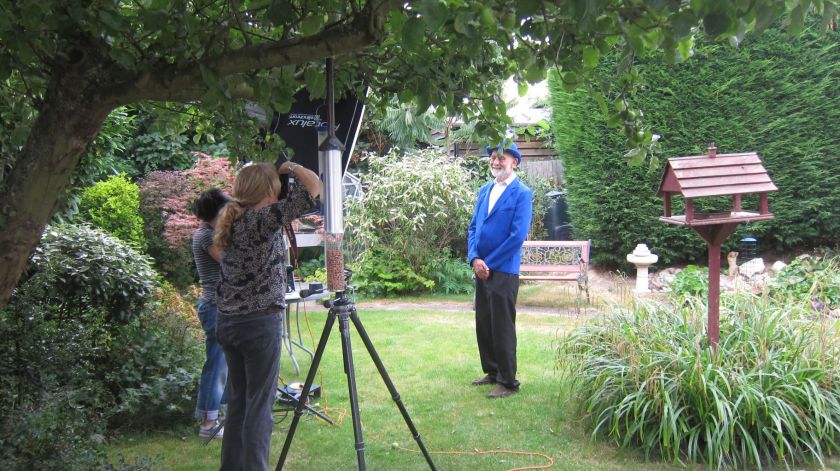 Back at Sid’s place, some professional photographers had arrived to do a piece on him for the Daily telegraph. He had been very active as a volunteer for the London Olympics and I think the article was along the lines of ‘Where are they now… (if not already dead)…’ or something like that. Clearly Sid was still alive, but barely… having not removed his Olympic uniform for almost 12 months! 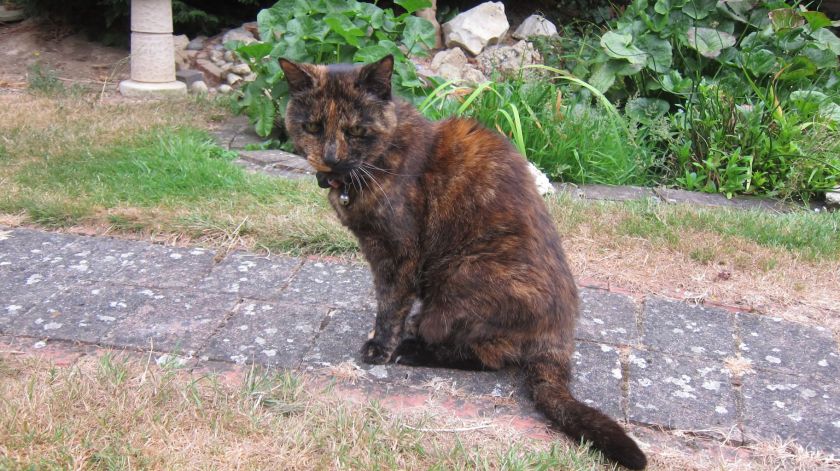 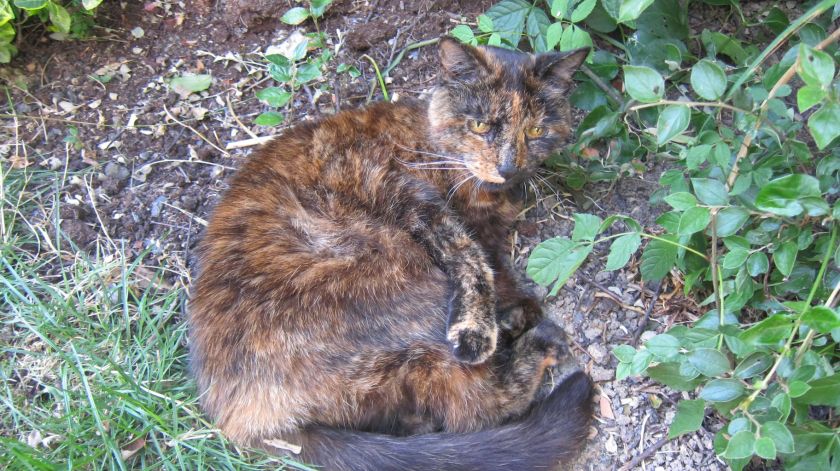 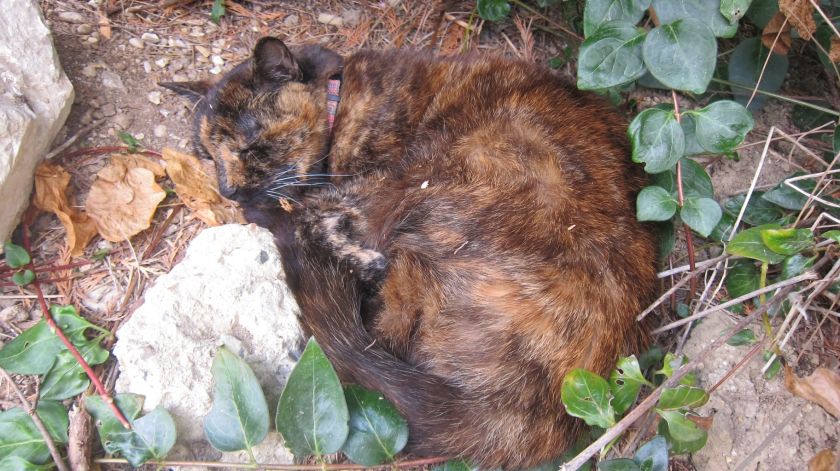 Noo fell in love with the family cat, Manu, although I know not why this ancient moggy was given such a strange name, as Sid, like Mobi, is a lifelong Spurs supporter. The elderly and enchanting Manu, has reached the incredible age of 20, which in catty years, makes her even older than Fergie – also of Manu fame. But Moggy Manu has nine lives, whereas Manu footy managers are only allowed six defeats before they are confined to the footy pooper scoopers of history. 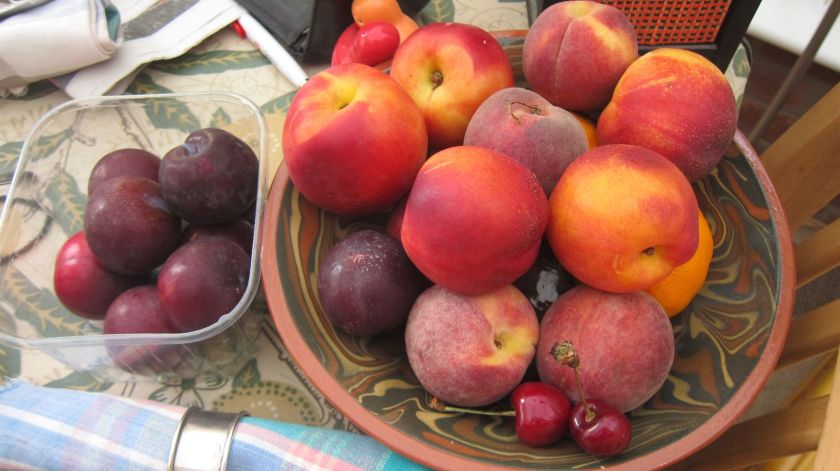 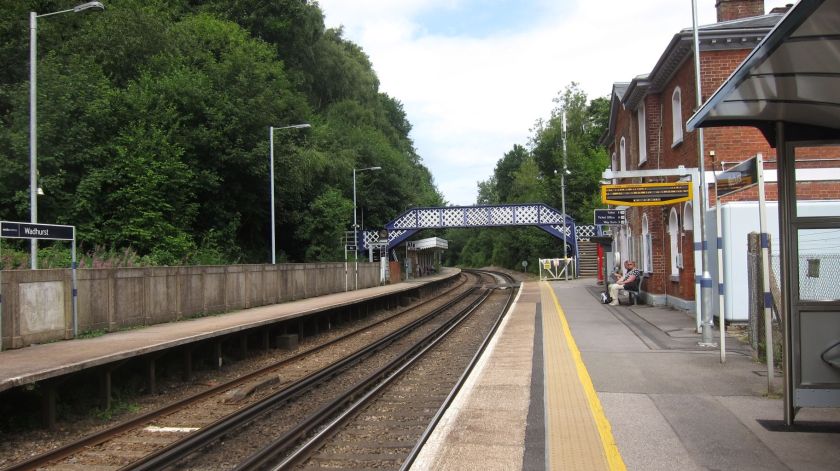 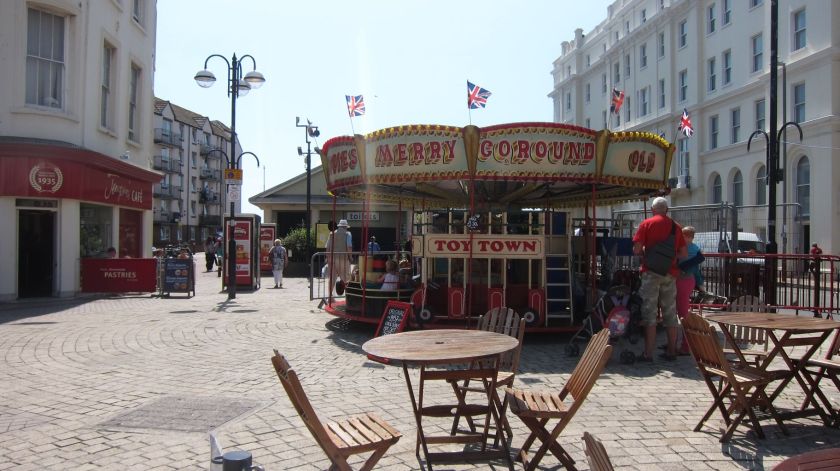 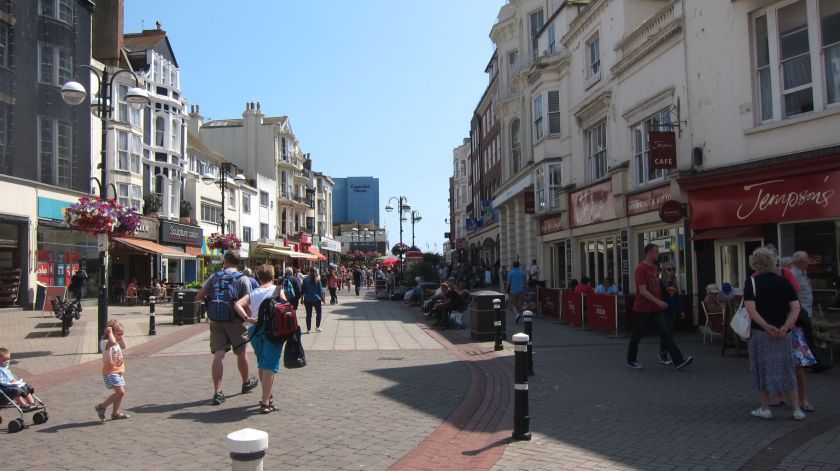 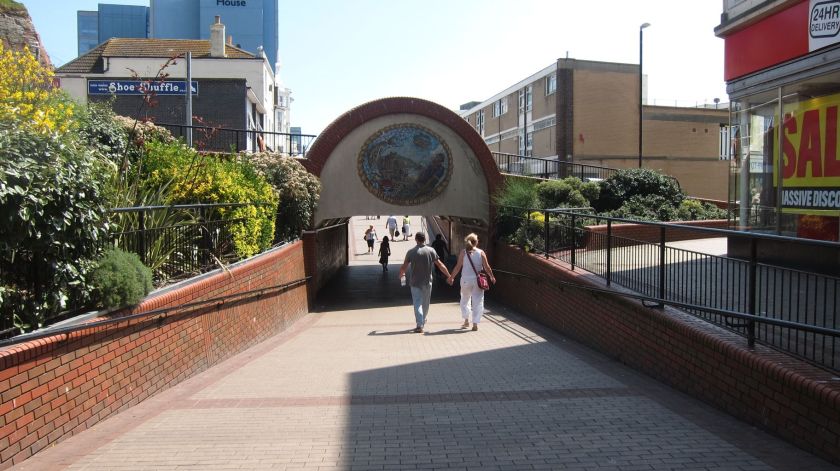 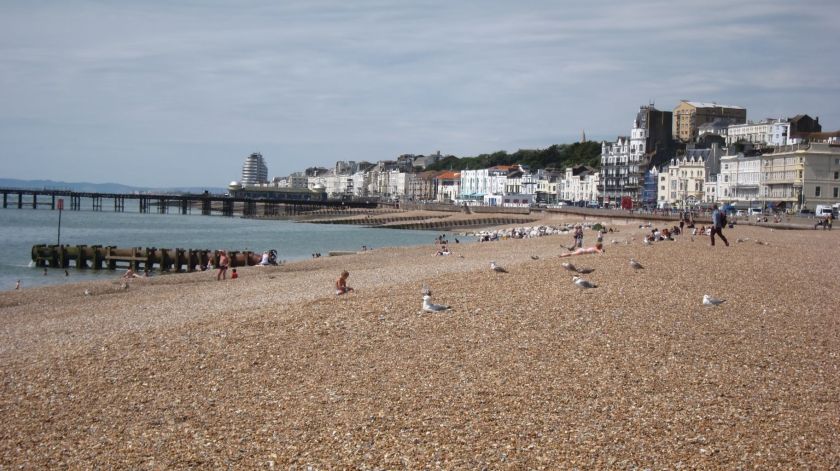 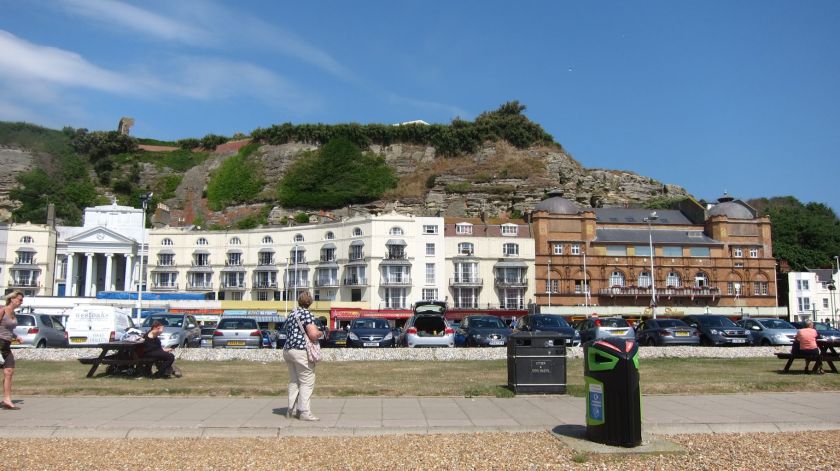 The weather was holding up well, so the next day Sid suggested we go down to the coast for the day. I thought maybe Brighton (which I love) or even Eastbourne and Beachy Head, the infamous suicide spot, (I like those kind of places).

He insisted on Hastings, which to me only brought back memories of a terrible holiday I had once spent with a previous wife some 25 years ago when we had driven to Hastings on a freezing cold, stormy afternoon. On that occasion I decided that Hastings was truly the arse’ole of British seaside resorts.

Anyway, at Sid’s insistence I was prepared to give it another go and it turned out to be a very pleasant day out. Sid is a train fanatic, so instead of driving down to the south coast he took us to a station in Kent called Wadhurst, (no, I’d never heard of it either…) and off we went on our choo choo to Hastings.

Despite the pebbly beaches, I reluctantly confess that Hastings had a certain charm – especially on a hot summer’s day. It can’t be all that bad, as it is the setting for the wonderful ‘Foyles War’ TV detective series, which has become one of my all-time favourite crime dramas.

There was a time when I could never have ridden in a cable car or in the cab of a funicular railway, and I even used to dread using many glass walled lifts, always shutting my eyes tightly during the scary trips.

I cured my vertigo and terror of heights some years back when I was in Canada with my family. I was faced with the choice of waiting on one side of a terrifying gorge all day long while my family took the cable car over to a village tourist spot, or gathering up my courage and going with them. I chose the latter and forced myself to keep my eyes open and ever since then, I have been pretty much cured. Going in the ‘deep-end’ really did work for me.

So this pissy little funicular in Hastings held no terrors and the views from the top were quite spectacular, although I did worry that Sid was trying to get off with Noo…. 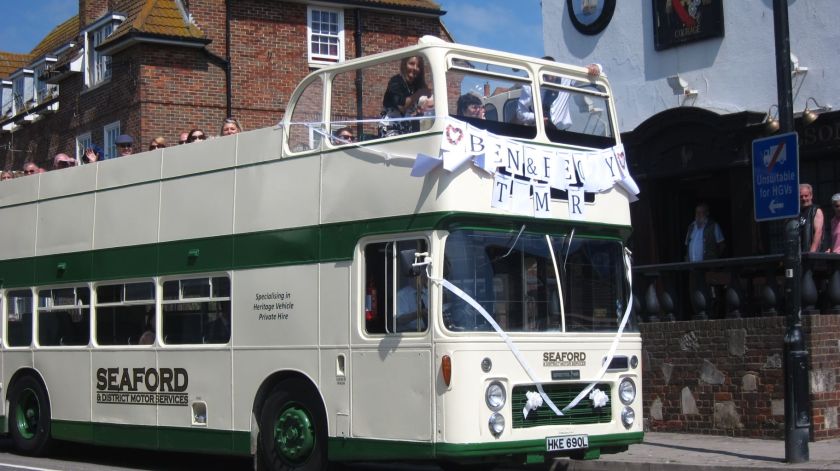 I must have eaten the largest plate of fish and chips I’ve ever had in my life at the aptly name ‘Mermaid Restaurant ‘before we made the weary journey back to Hastings station, and thence to Wadhurst. 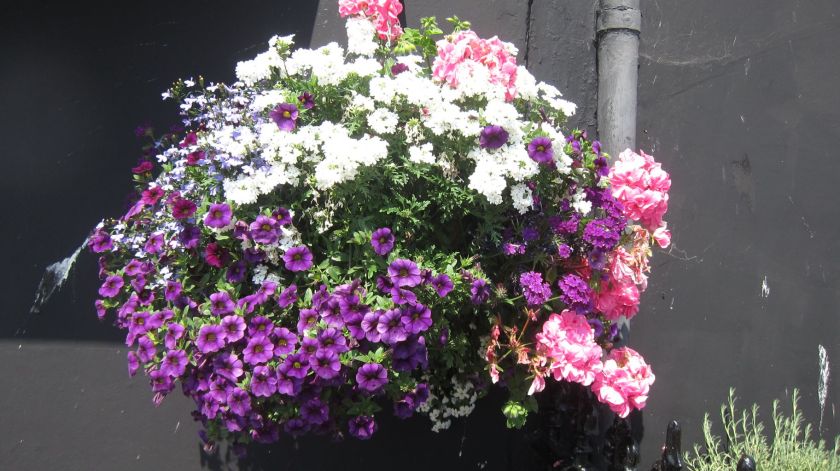 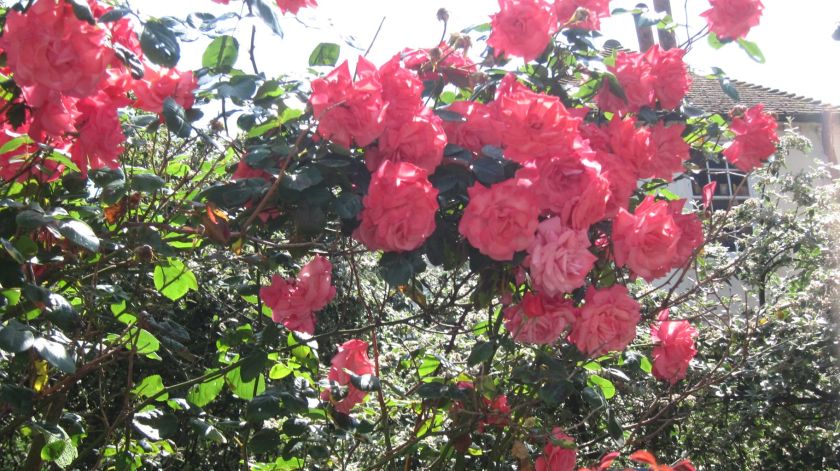 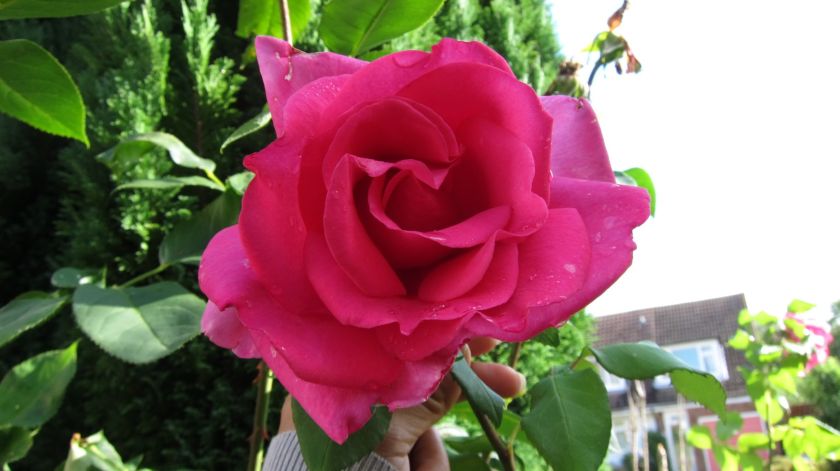 As you will see as my odyssey continues, Noo’s obsession with cats and fruit is more than outweighed by her obsession with English flora and fauna. Above is a small selection of flora that we encountered during our first couple of days in England.

Next week, our first of two trips to London… and more….